Oroonoko; Or, The Royal Slave 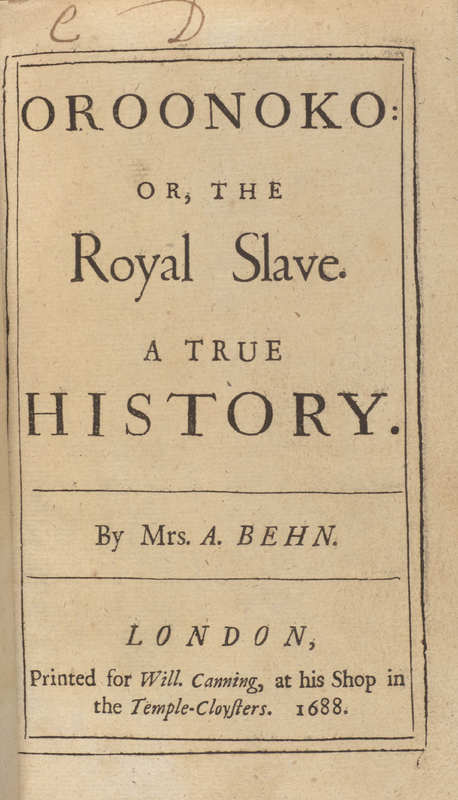 Aphra Behn was the first woman writer to make a living from her work. Displayed here is a first edition of her most well-known work, Oroonoko. Some scholars argue that it is actually the first novel written in English, as opposed to the much more commonly cited Robinson Crusoe (1719). Behn presents the story as if it were true, even inserting herself into the text as a character who witnessed it all. Little evidence exists to verify Behn’s account, but a career woman writer like herself may have felt the need to defend herself preemptively from critics by making the story seem true. Oroonoko tells the story of a married couple from Coromantee (modern day Ghana), Oroonoko and Imoinda, who suffer tragedy after being sold into slavery. Both Oroonoko and Imoinda are extraordinary: intelligent and physically flawless. Based on the characters’ super-humanity and their suffering under slavery, many believe Oroonoko to be an early anti-slavery text. In addition, some believe that Behn exposes oppression in the story to subtly critique the prejudice she faces as a female writer.

← The Woman of Colour
Uncle Tom’s Cabin; or, Life Among the Lowly →
Racial Justice
Oroonoko; Or, The Royal Slave