A Vindication of the Rights of Woman: with Strictures on Political and Moral Subjects 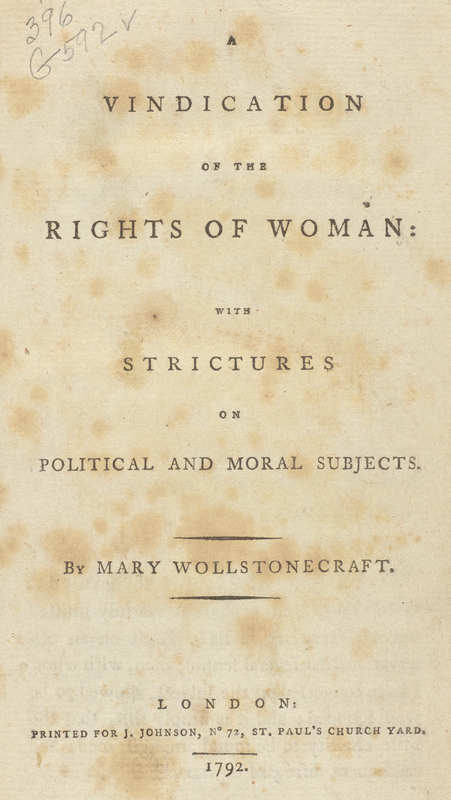 A Vindication is one of the earliest and most well-known feminist treatises (first edition on display). Wollstonecraft, a philosopher and radical during the age of the French Revolution, argues that women are not naturally inferior to men but only seem so due to their lack of education. She notes that education would help women become more productive members of society while also making them more successful wives and mothers. Wollstonecraft rails against excessive sensibility in women, contending that dramatic emotional reactions hold women back. In Wollstonecraft’s time, the text led to a conservative backlash, with Horace Walpole famously calling her a “hyena in petticoats.” The controversy only increased after Wollstonecraft’s death when her husband, William Godwin (with whom she had daughter and Frankenstein author Mary Wollstonecraft Shelley) published a well-meaning but ill-advised memoir of her. His text revealed Wollstonecraft’s worst moments, including her other, illegitimate daughter and multiple suicide attempts. Doing so tarnished Wollstonecraft’s reputation as a philosopher for centuries. Feminist scholars revived serious interest in her work in the 1970s, and now Wollstonecraft is viewed as having an important role in early feminism and Enlightenment philosophy.

Mary Wollstonecraft (1759-1797)
A Vindication of the Rights of Woman: with Strictures on Political and Moral Subjects
London: J. Johnson, 1792

← The Female Quixote
Woman's Wrongs: A Counter-Irritant →
Engaging Male Writers, Disputing Misogyny
A Vindication of the Rights of Woman: with Strictures on Political and Moral Subjects