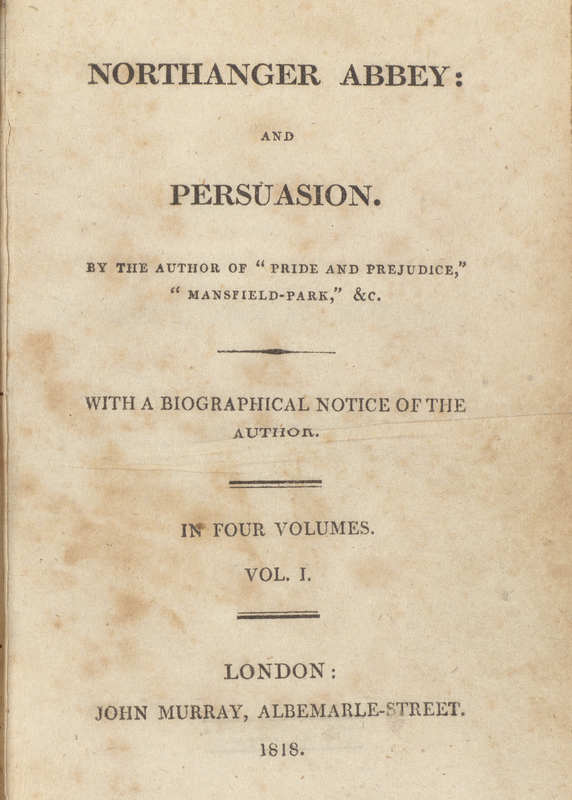 Northanger Abbey and Persuasion were released together after Austen’s death. This first edition contains an introduction from Austen’s brother, Henry. Here, he first publicly identifies Austen as the author of these texts and her previous novels--these pages are on display here. Northanger Abbey is a comic novel, parodying the gothic novels of the late 18th century. Catherine Morland, the novel’s teenage heroine, fantasizes that her life contains Gothic mysteries and twists. She grows independent and self-assured throughout the novel, moving past her childish fantasies. Northanger Abbey defends the novel, which many viewed as an inferior, feminine pursuit in comparison to other literature, with Austen addressing directly how female readers face judgement for reading novels.

Persuasion begins in the third volume of Northanger Abbey and Persuasion, the title page of which is on display here. Austen’s final completed novel features her oldest heroine, the 27-year-old Anne Elliot. The text diverges from earlier works in that Anne Elliot has been engaged before to Captain Frederick Wentworth, a naval officer, but she broke it off eight years prior to the start of the text. Lady Russell, a family friend, persuaded her to do so. As reflected in the title, Austen took interest in the hows and whys of individuals persuading others; she, herself, had recently persuaded a niece into entering a long engagement, which Austen later regretted. Anne Elliot, in part due to her maturity, ultimately possesses the confidence to break away from the pressures of her family and their social circle, resisting expectations she often faced as a supposed spinster. Persuasion demonstrates how Austen had begun to mature as a writer prior to her death. In addition to the marriage plot, the novel contains a less comic, more emotional tone, which some have compared to Romantic poetry. 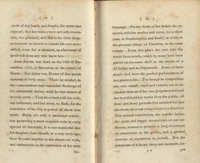 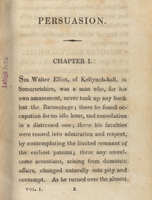