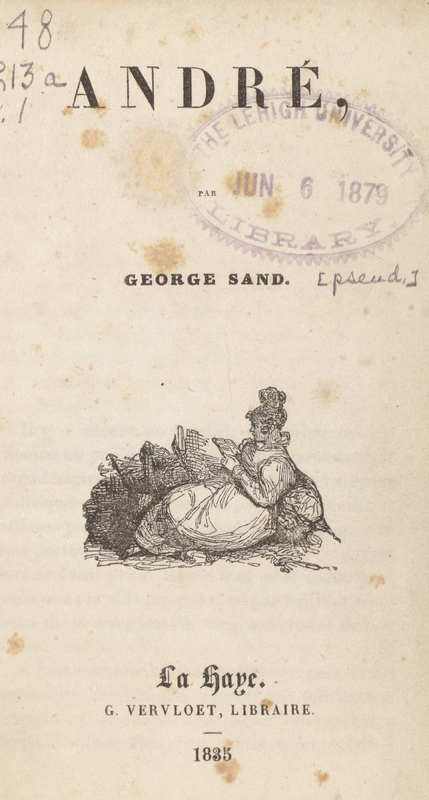 Amandine-Aurore-Lucile Dupin, pen name George Sand, had a 40 year career writing novels and dramas. Publicly, she defied expected gender norms, wearing masculine attire that allowed her a level of freedom unreached by her female contemporaries. Sand also started her own newspaper after the 1848 Revolution in France, which addressed women’s and worker’s rights. André explores similar feminist and revolutionary themes. The protagonist spots Genevieve, a rebellious young woman who tries to live outside of male dominated society, while walking in the fields away from his upper class home. André knows his father would be angered by his extramarital connection with the subversive Genevieve, but, soon, their secretive visits lead to reputation ruin for Genevieve, demonstrating that, as is typical, transgressing gender norms often leads to harm for women. This edition, from 1835, is quite early (the novel was published in 1834); it, like many Sand texts, has yet to be translated to English.

A later edition of this text has been digitized and is available through the Internet Archive.