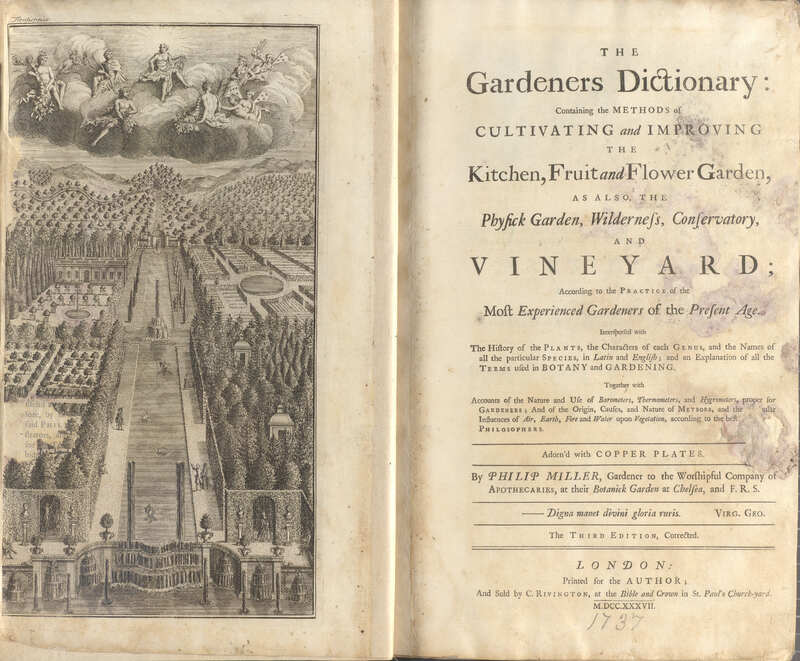 Considered to be “the most distinguished and influential British gardener of the eighteenth century” by modern scholars, Philip Miller is best known for being the chief gardener of the Physic Garden at Chelsea from 1722 to 1770. A physic garden is designed to grow plants for medical use and academic study. The Chelsea garden that Miller oversaw had been deeded to the Society of Apothecaries by Sir Hans Sloane, whose collection formed the foundation of the British Museum and Library. As part of this deed, Sloane requested that 50 new herbarium samples be provided to the Royal Society every year. It was with this extensive botanical background that Philip wrote The Gardeners Dictionary, which was published in eight different editions during his lifetime. While Miller initially resisted the Linnaean taxonomy that was becoming popular in the 18th century, he eventually adopted the naming standard in his eighth and final edition.

Philip Miller (1691-1771).
The Gardeners Dictionary: Containing the Methods of Cultivating and Improving the Kitchen, Fruit and Flower Garden... adorn'd with copper plates. London: Printed for the author; and sold by C. Rivington, 1737.