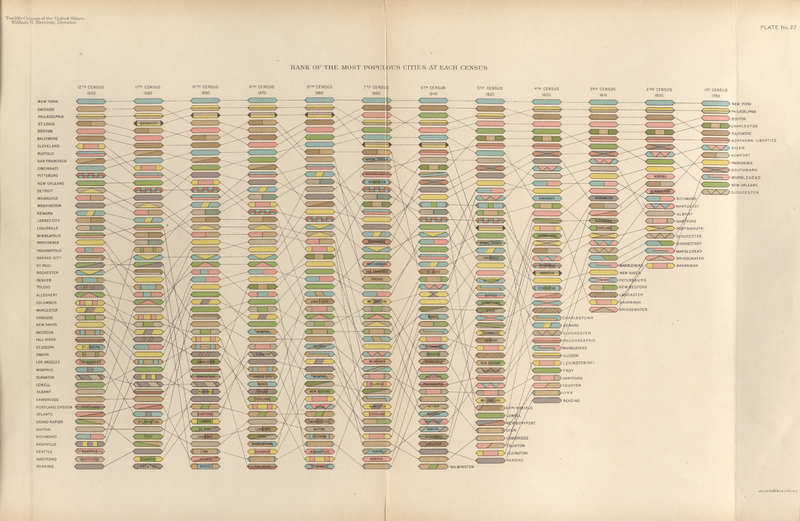 Always a rich source of statistical data, the U.S. Census grew to incorporate a variety of graphic displays under the direction of Henry Gannett (1846-1914), who served as geographer of the U.S. censuses of 1880, 1890, and 1900. Gannett also helped establish the U.S. Board of Geographic Names, the Association of American Geographers, and the National Geographic Society. Featured from the Statistical Atlas are several examples of the different visualization methods used to describe the U.S. population:

Plate no. 22 uses a visualization technique now referred to as a bump chart, which depicts the ranked population of major U.S. cities from the first census in 1790 to the 12th in 1900. This chart is read from right to left and contains 450 points of data using ten colors in an array of patterns to identify individual cities. The “bump” term originates from the points where the lines of tracked data overlap.

•Plate no. 28 geographically visualizes population changes from 1890 to 1900 using five colors to represent percentage changes. The data is presented by county. This map draws on similar data to the bump chart, but displays it geographically rather than by rank.

•Plate no. 63 examines the demographics of individual states by nationality of foreign born citizens. This graph makes it easy to visually identify the extreme diversity of American immigrant populations by assigning each of the fifteen populations a unique color.

•Plate no. 115 depicts death rates associated with scarlet fever and diptheria using polar area diagrams and back-to-back bar charts. The circular diagrams, which are separated by cities and rural districts, are divided by month to visualize the cyclical nature of disease mortality. The bar charts help to compare mortality rates at different ages across over two time periods. 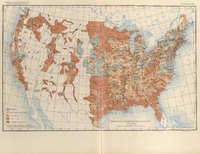 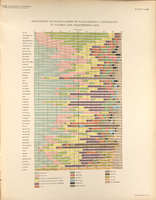