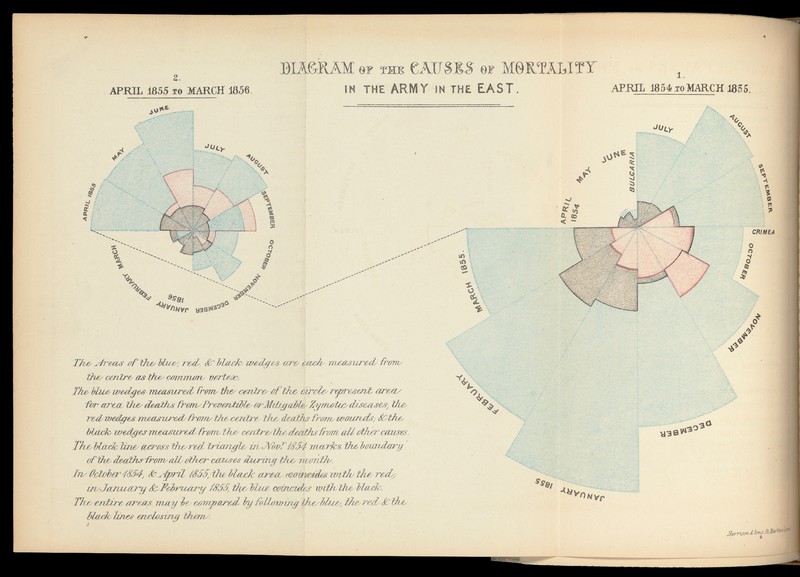 Reproduced from the Wellcome Library Collection.

In addition to founding the modern field of nursing, Florence Nightingale was also a noted statistician. During the Crimean War (1853-56), in which she earned her nursing fame, Nightingale collected extensive data on mortality rates in the British Army. She visualized this data using a polar area diagram, which is now known as the Nightingale Rose Diagram. While similar to William Playfair’s earlier pie chart, Nightingale made each section equal in angle and represented magnitude using the radius of each section. Each of the twelve sections represents one month and each of the three colors represents a different cause of death, which shows the cyclical nature of the data. Nightingale continued to advocate for sanitation reform throughout her life, which her data showed to improve public health. As a result of her work, Nightingale became the first female member of the Royal Statistical Society and an honorary member of the American Statistical Association.

Florence Nightingale (1820-1910).
“Diagram of the Causes of Mortality in the Army in the East.” Reproduced from: Notes on Matters Affecting the Health, Efficiency, and Hospital Administration of the British Army: Founded Chiefly on the Experience of the Late War. Reproduced from the Wellcome Library Collection.
London: Printed by Harrison, 1858.