Laboratory and Table of Affinities 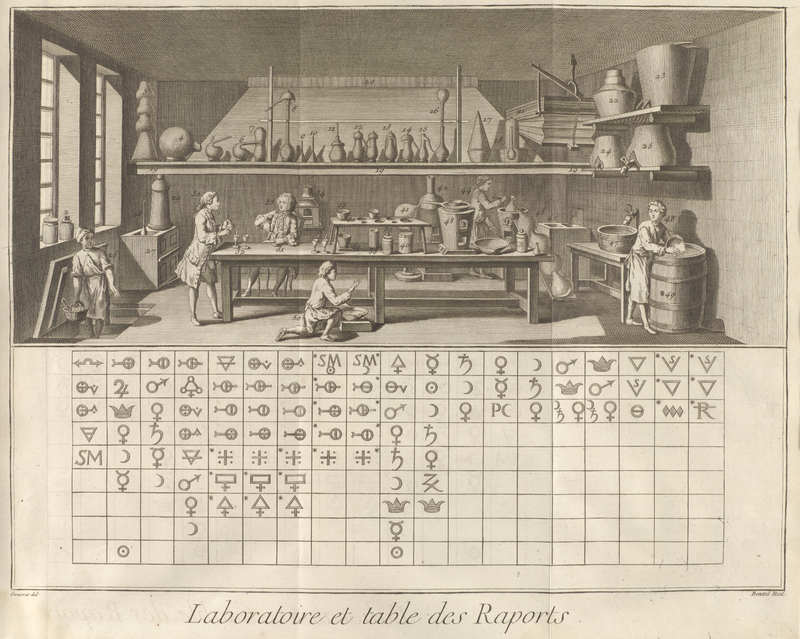 This plate depicts the chemical instrumentation in a “Laboratoire de Chimie”, and below it, a “table of affinity”. In one account by authors Lehman and Bensaude-Vincent [i], the chemical apparatus is of the kind used in high-price chemistry lectures for chemists and pharmacists; “each series of lectures contained more than two thousand experiments using equipment similar to the one illustrated” [i, 576] in this engraving. [Fn. A] One such public lecturer, pharmacist Guillaume-Francois Rouelle, was “an unmethodical, cheerful, enthusiastic, voluble teacher, who communicated his passion for chemistry to his audience.” [i, 575-76] He is estimated to have attracted over one thousand people to his lectures. Diderot described the audiences at Rouelle’s lectures as comprising “one forth [sic] of the city” from all groups in society, which included Diderot himself as well as chemist Antoine Lavoisier and Jean Jacques Rousseau [i, 576].

The “table of affinity” pictured below the laboratory depicts the attractive propensities of chemical substances. Duncan notes that many such tables were published throughout the 18th century [ii, 177]. The table in the Encyclopédie is based on one first published by Etienne-Francois Geoffroy the Elder in 1718 [ii, 177 and 178, fn. 13].. Geoffroy’s table is described as consisting “of sixteen columns in which the different substances are indicated by the customary symbols, alchemical in origin. At the head of each column is the symbol for the substance or group of substances that it concerns. Below this the symbols for the substances with which that substance reacts are arranged in order of their affinity…” [ii, 177]. Asterisks in the table represent additions not present in Geoffroy’s original table [ii, fn. 13]. Affinity tables represent a development in the recording of experimental results, which enabled practitioners to more accurately predict the outcomes of chemical reactions.

Fn. A:  This interprets the quoted item as referring not to the public lectures mentioned in the article, but to the "private and quite expensive courses of chemistry."

[i] Lehman, C., and Bensaude-Vincent, B. Public Demonstrations of Chemistry in Eighteenth Century France. Science & Education, 16, 573-583.