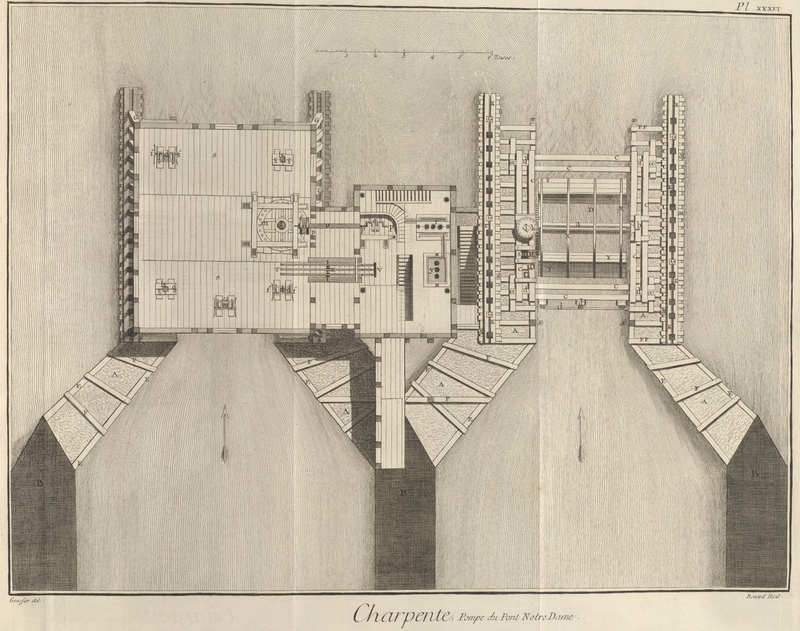 The first bridge in Paris was built over the Seine River in 886. In 1499, King Charles VI of France had the Notre-Dame Bridge built over the Seine. After collapsing shortly after its construction, the Notre-Dame bridge was replaced by a stone arch bridge in 1507 and subsequently underwent many alterations. In addition to connecting the north and south sections of Paris, houses were built on the bridge and a water pump was installed on the piers. The power of the water rushing around the piers drove the pump to bring drinking water directly from the river to the citizens of Paris. Most of the Paris water supply came from the Seine River. In the 18th century, the Seine River was a waterway used for many purposes, particularly manufacturing industries along its course. However, the water was not sanitized in any way. The weight of the houses endangered the bridge and in 1746 the houses were removed.

In the 19th century, a similar engineering concept of using hydraulic power was applied in Philadelphia. In 1801 Philadelphia tapped the Schuylkill River as a water supply. Using two steam pumps installed at river level, the water was pumped up 90 feet to reservoirs on the “Fair-Mount” (now Fairmount Park) and gravity fed to the citizens of Philadelphia. The city fathers of Philadelphia recognized that their drinking water source should be kept clean and banned the dumping of waste into the river. The Waterworks buildings, built in 1812, are still visible on the Schuylkill River. The purpose of these buildings has changed and are now used as restaurants and meeting places within a parklike area behind the Philadelphia Art Museum. Locally an example of 18th century water pumps are the Bethlehem Waterworks beneath the bridge that carries traffic off the Hill-to-Hill Bridge onto Main Street, Bethlehem.