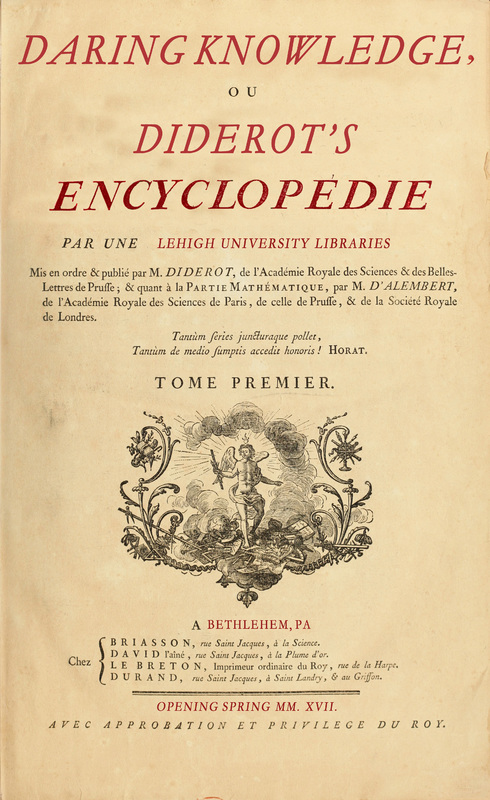 On display are a selection of illustrations drawn from the first and second editions of the Encyclopédie; ou Dictionnaire raisonné des sciences, des arts et des métiers (Encyclopaedia, or a Systematic Dictionary of the Sciences, Arts, and Crafts) along with associated publications. These selections highlight detailed imagery of science and industry in the 18th century, works of historic impact, and subjects currently and historically studied at Lehigh.

First published in Paris, France between 1751 and 1772, the first edition of the Encyclopédie has been a part of Lehigh’s Libraries since 1956, when it was donated by alumnus Robert B. Honeyman, class of 1920. The first edition of this work consists of seventeen text volumes and eleven volumes of engraved plates. In total, these volumes contain 2,569 plates that illustrate the concepts described in the text volumes. These plates offer detailed snapshots of manufacturing processes for a number of different industries and scientific endeavors, including the specific tools that were being used at the time and the construction and inner workings of various machines. In a world before photographs, these illustrated plates provide some of the best examples of scientific research and daily life from the mid-18th century available today. The second edition of the Encyclopédie has been part of Lehigh’s Libraries since 1895, when it was donated as part of a gift by Sophia Coxe following the death of her husband, Lehigh trustee Eckley B. Coxe.

The 27 year publication of the Encyclopédie, from Denis Diderot and Jean-Baptiste le Rond d’Alembert joining the project as editors in 1746 to the publication of the final plate volume in 1772, was beset by constant threats and delays. From July to November of 1749, Diderot was imprisoned by the French government in Vincennes for writing the Lettre sur les aveugles à l'usage de ceux qui voient (Letter on the Blind for the Use of Those Who Can See), which prompted accusations of promoting deism or atheism. The Encyclopédie was repeatedly attacked by the Jesuit Order through its Journal de Trévoux, in which Diderot was accused of plagiarizing Francis Bacon's tree of knowledge, “criticizing [Jesuit] teaching methods, denigrating kings and saints, preaching freedom of speech and plagiarizing the Dictionnaire de Trévoux.”1 As a result of these accusations, the French government appointed three censors to review each article to be published in the Encyclopédie.

While we now have a universal encyclopedia of all information open to limitless contributors in the form of Wikipedia, the concept of a systematic organization of all knowledge was revolutionary at the time of the Encyclopédie.

Authors of the Encyclopédie →
About the Exhibit