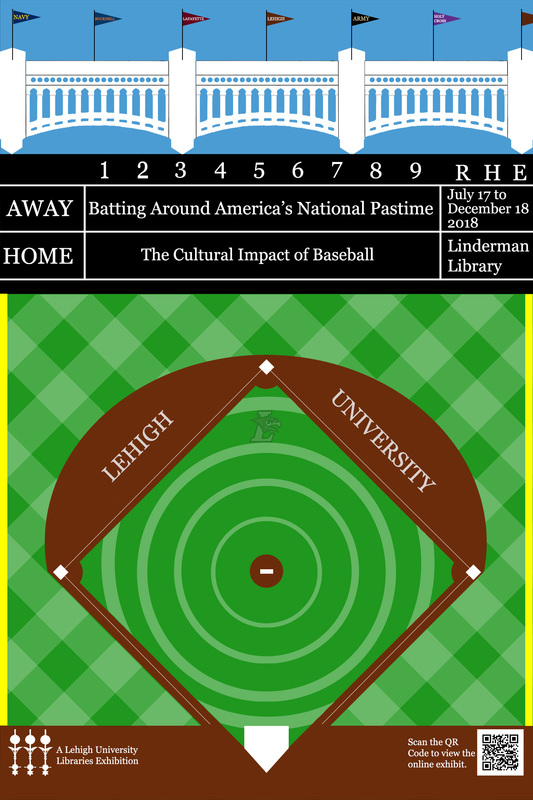 “...the game of Base Ball, as perfected of late years, is undoubtedly an American game, and one we can now fairly claim as our national out-door sport.” -Henry Chadwick, The Base Ball Player's

Book of Reference, 1866 This exhibition examines how baseball, the first uniquely American sport, assumed a significant place in America’s national identity. The origins of the game are murky, with roots in British sports like cricket and rounders. During the 1850s to 1870s, baseball became professionalized with paid players, formal rules, and more stable ball clubs organized into leagues. Around this time baseball also became a part of intercollegiate sports, with Lehigh’s team beginning play in 1885.

Since this early heyday, baseball’s impact on American culture has been evident in the arts. From Ernest Thayer’s 1888 poem “Casey at the Bat,” baseball has been a favorite subject of writers, who used it to explore everything from the human condition to what it means to be an American. Later, film used baseball to examine themes of friendship, teamwork, honor, and fair play. Simple statistics and records have always been an integral part of the game, but fans seeking a deeper understanding of the intricacies of baseball rely on the smallest data points. The development of new metrics and analytics has enabled a more complex numerical understanding of the game. Much of this analysis and historical research has been driven by the Society for American Baseball Research (SABR), which has a strong presence in this exhibit. Baseball also shares in America’s shameful history of racism and misogyny. Excluded by Major League Baseball’s unwritten policy of racial segregation, players of color found an outlet for their considerable talents in the Negro Leagues. Presaging the civil rights movement of the 1960s, baseball became racially integrated in 1947 with the signing of Jackie Robinson by the Brooklyn Dodgers. Women were also relegated into their own league, the All-American Girls Professional Baseball League, enabled by the vacancy left by men fighting in World War II. While women have yet to be truly integrated into MLB, this league and other “Rosie the Riveters” helped set the stage for the second wave of American feminism.

To learn more about baseball’s influence on American culture, Lehigh Libraries invites you to view the exhibition cases located on the ground, first, and third floors of Linderman Library. The items on display in this exhibit are drawn from Lehigh’s circulating and Special Collections or are on loan from Lehigh’s Athletics Department. The exhibition will be on display until December 18, 2018.