Exhibit Case 4: In honor of Frances E. Levine, given with love by Harry B. Levine 1956 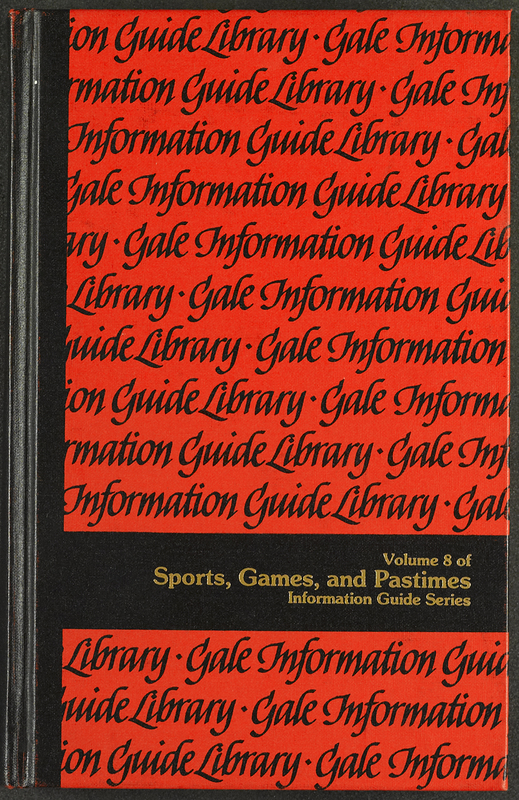 A SOCIAL HISTORY OF GAMBLING AND GAMING

From the time discussions to repurpose the former Bethlehem Steel Corporation site on the south side of Bethlehem into a casino began, much interest has been focused on the impact of gambling upon the region.  In 2007, Special Collections responded by starting to build a small research collection to stimulate interest in a historical study of the social and moral effects of gambling.  The representative works here range from a comprehensive treatment of the subject in 18th-century France to 19th century treatises presented at American university to a 20th century catalog of equipment available to cheaters. 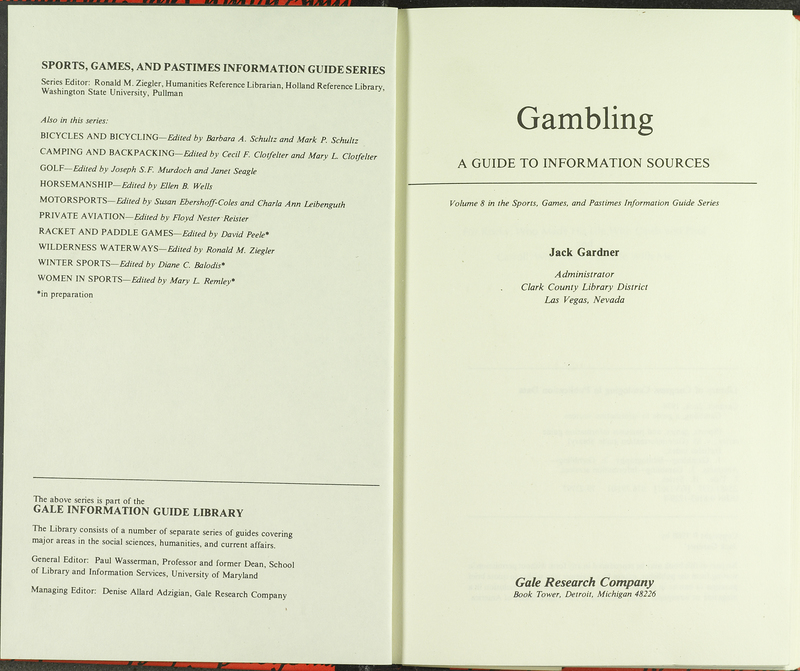 Bibliographies such as this enable research to trace the history of the literature in a discipline – in this case, gambling and gaming.  Gardner has compiled a list of works related to sports, games, and other pastimes. 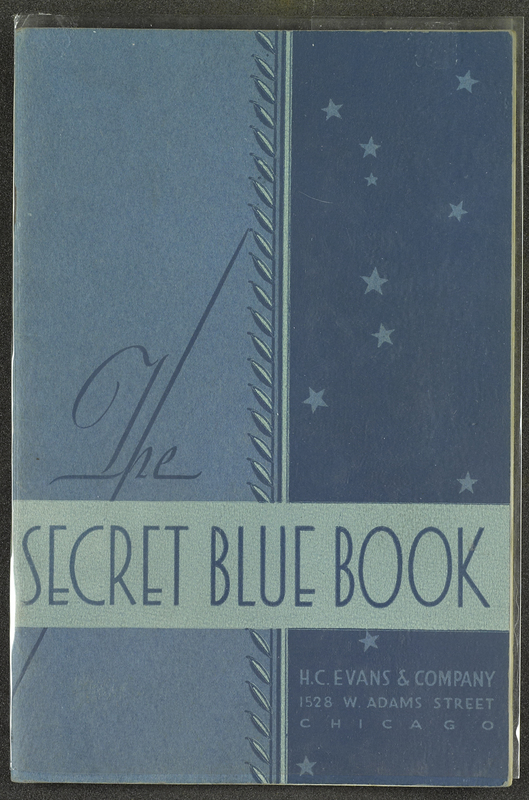 This curious little pamphlet markets both legal supplies and equipment for gaming establishments, and apparatus intended to aid “cheaters.” Included are both shaved and weighted dice, as well as other tools used in gambling. 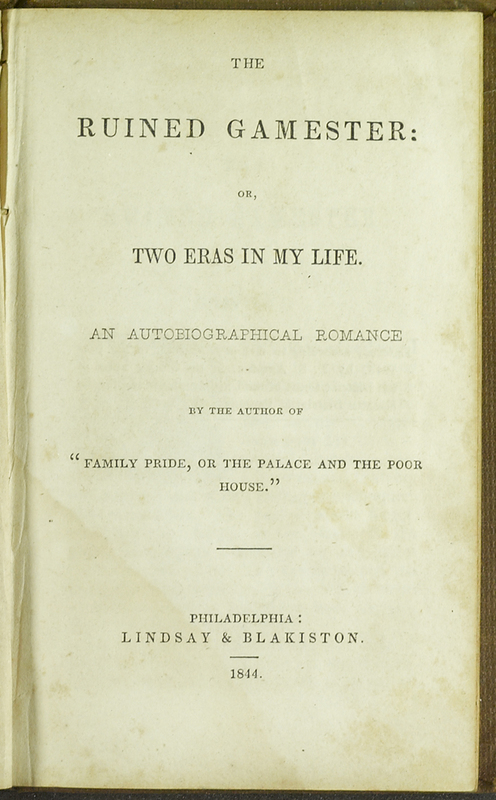 Timothy Shay Arthur (1809-1885).
The Ruined Gamester: or, Two Eras in my Life. An Auto-biographical Romance. By the Author of “Family Pride, or
The Palace and the Poor House.”  Philadelphia:  Lindsay & Blakiston, 1844.

In addition to the present work on gambling, Arthur wrote the well-known temperance novel, Ten Nights in a Bar-Room and What I Saw There (1854), which influenced many Americans’ views on alcohol.  He contributed articles to the popular press for many years, working to promote the values and etiquette of the middle class. 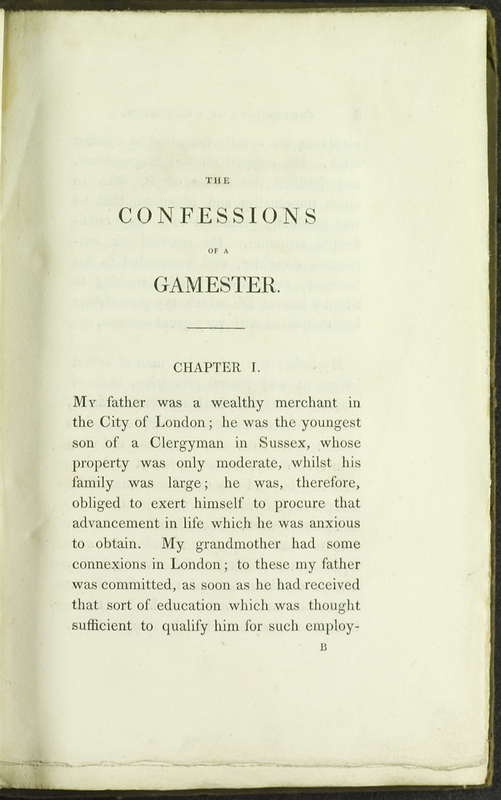 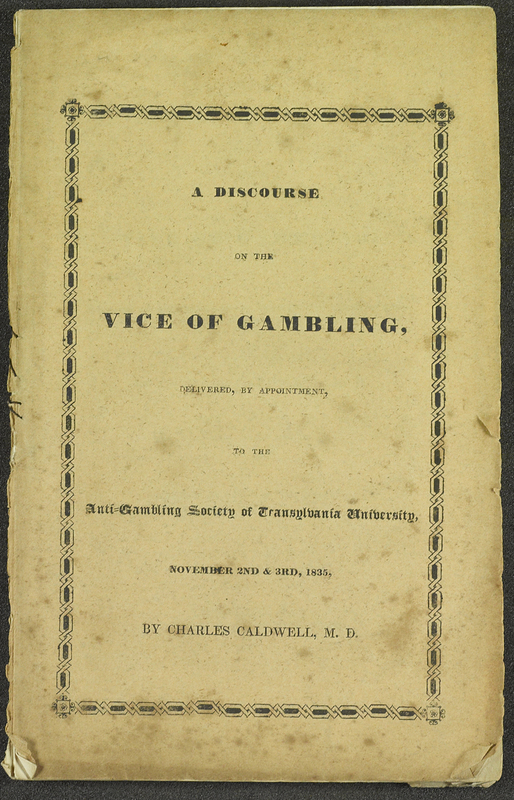 Caldwell’s lecture was intended to reach students and educate them about the dangers of gambling.  Gambling was a growing problem at American universities at the time. 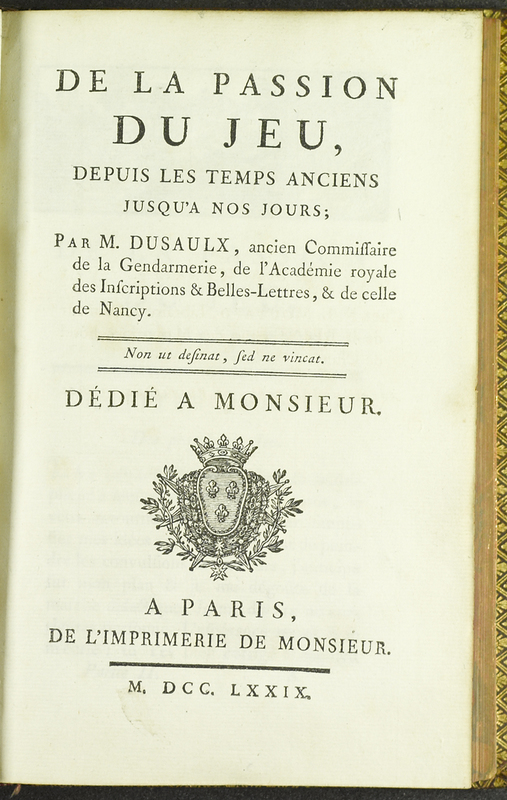 In this comprehensive study of the sociology of gambling, French writer and self-confessed former gambler Jean Dusaulx analyzes the phenomenon and points out the resulting “moral depravity” which it spawned. Gambling was part of the fabric of French society, where all classes participated in card games and lotteries.  He includes numerous anecdotes to illustrate the midnset of the gambler, making De la passion du jeu an important account of this aspect of the social history of pre-Revolutionary France. 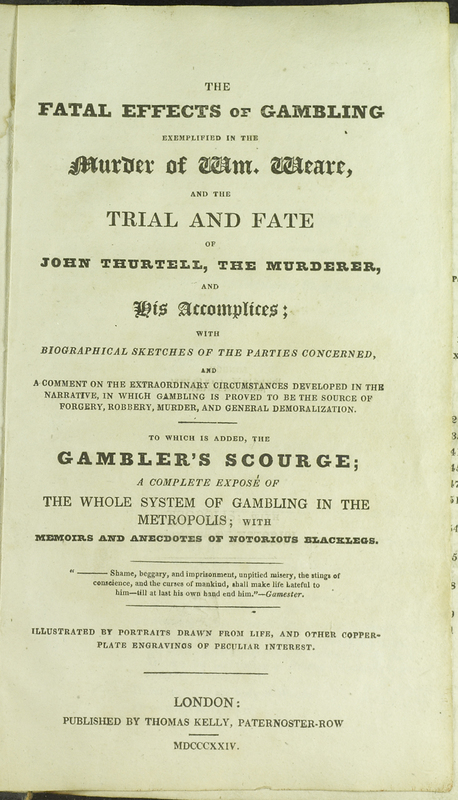 The Fatal Effects of Gambling Exemplified in the Murder of Wm. Weare and the Trial and Fate of John Thurtell, the Murderer and his Accomplices: with Biographical Sketches of the Parties Concerned, and a Comment on the Extraordinary Circumstances Developed in the Narrative, in which Gambling is Proved to be the Source of Forgery, Robbery, Murder, and General Demoralization.  London:  Thomas Kelly, 1824.

This descriptive title explains the hardships and crimes which the anonymous author attributed to gambling.  Eleven engraved plates illustrate the story.