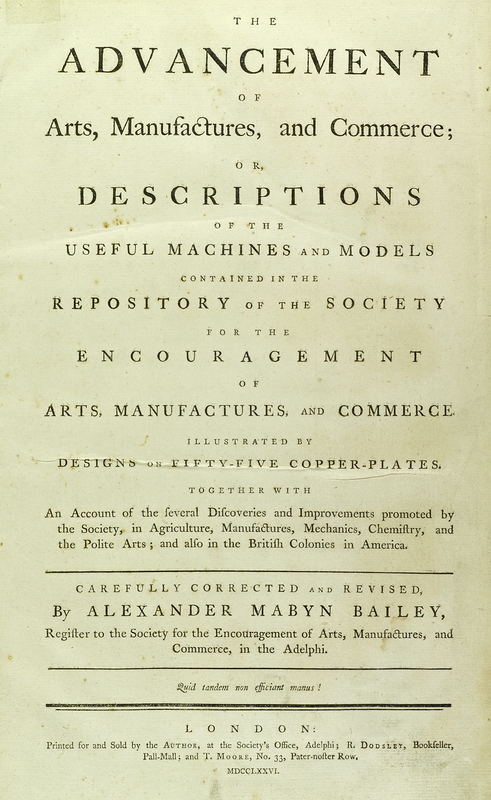 This is the first English atlas of machinery, illustrated by designs on fifty-five colored copper plates drawn by William Bailey and his son Alexander Mabyn Bailey.  Included are drawings of agricultural equipment, machinery to power looms, cranes, a sawmill, and others representative of Britain’s rise as a manufacturing power. 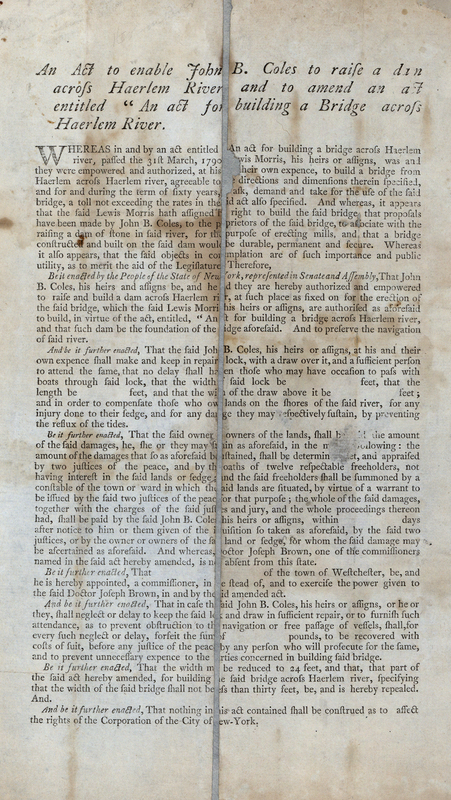 Originally a bridge over the Harlem River at the Third Avenue (Bronx) site was proposed in the 1770s.  In 1774, Lewis Morris, a gentleman farmer and signer of the Declaration of Independence, received permission to build a bridge connecting Manhattan with the Bronx.  The Revolution interrupted its construction, but in 1790 Lewis Morris received a second franchise to build a dam bridge across the Harlem River to make a direct connection from New York City to Boston.  He lost interest in doing so and in 1795 had the Act of 1790 amended in favor of John B. Coles.  Coles built a bridge with a stone dam as a foundation, which held back the waters of the Harlem River to furnish water power for mills established along the river banks.

Navigation on the river was not impeded, as Coles provided a passage through the dam bridge for vessels attended at all times by a lock keeper.  Coles was granted the right to collect tolls as long as he kept open the 24' wide span in the dam bridge.  The Coles family retained the privilege for 60 years, and it was so well patronized that the owners incorporated as the Harlem Bridge Company.  The well-maintained span as the principal artery of travel from New York City to Boston carried the well-known Boston Post Road.  Subsequently, the Coles bridge was replaced by the first iron bridge built in New York by the Harlem Bridge Company.  The second Third Avenue Bridge was built in 1858, but demolished in the 1890s.  Special Collections has a photograph of this iron bridge. 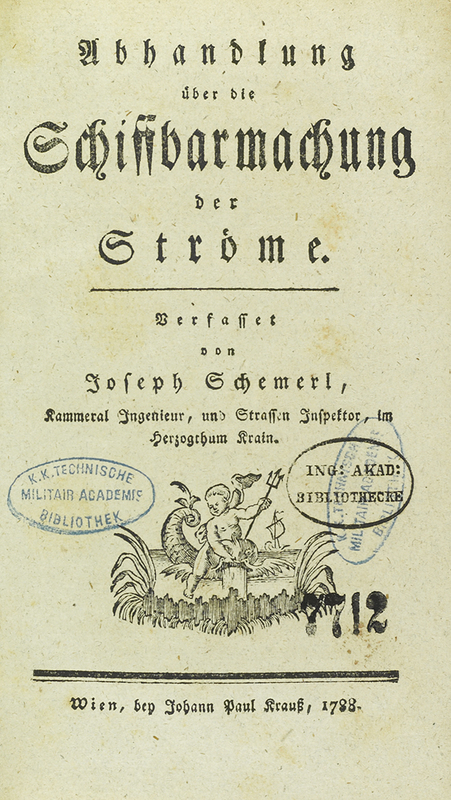 This is the only edition of this important technical manual on canals, locks, bridges, tow paths, and other means of improving waterways.  Schemerl managed the construction of both land and water transportation throughout the Austrian Empire, and shares his expertise with readers through publication of this work which contains fourteen etched folding plates. 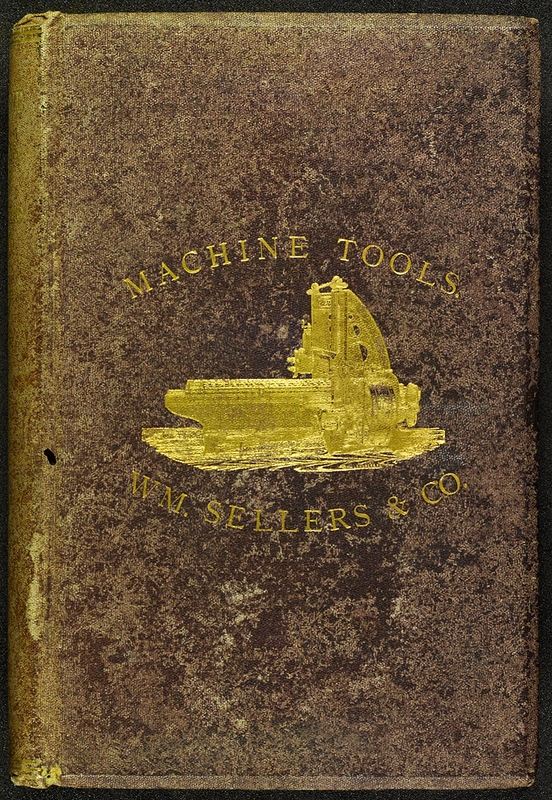 Illustrated by forty mounted albumen photographs of machine-tools, this trade catalogue was published by one of the leading firms in the manufacture of machine equipment.  Founded by Philadelphia engineer William Sellers, the company offered factory-owners and engineers a wide variety of specialty machine-tools, including lathes, steam-hammers, drills, and cranes.

This catalog’s use of photographic advertisements to promote the sale of tools was unusual for the time, as the process was expensive and its use still not widespread.  It is thought that the photographs were taken by Sellers’s cousin American inventor and photographer Coleman Sellers (1827-1907), who worked for his cousin’s firm throughout the mid-19th century.  He served as chief engineer and also was made partner in 1873, the year this catalog was published.  He was a noted inventor and patent-owner, responsible for a number of mechanical innovations.  Sellers is best known for patenting the 1861 Kinematoscope, an early prototype of a moving-picture camera. 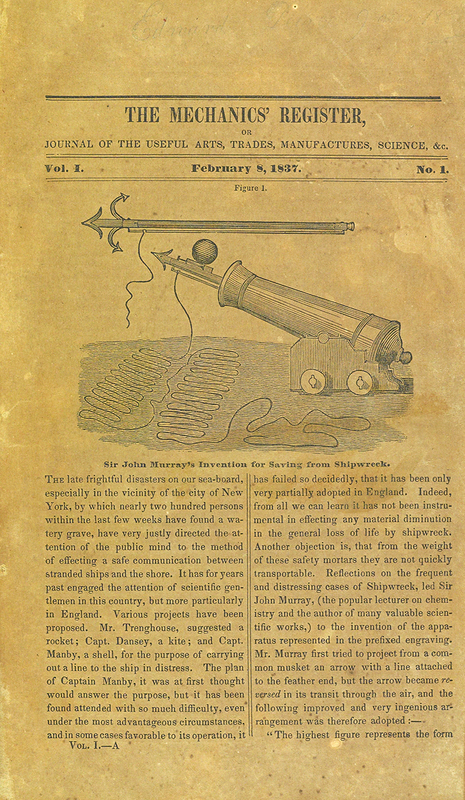 This early American journal reported on topics ranging from durable pavements to wooden and metal tools to dry rot in timber. It was meant to advise both the layman and practitioner alike on the history, manufacture, and use of household items such as paint and cutlery. Reports on new discoveries as well as improvements enabled early 19th-century inhabitants to keep abreast of new inventions and discoveries. 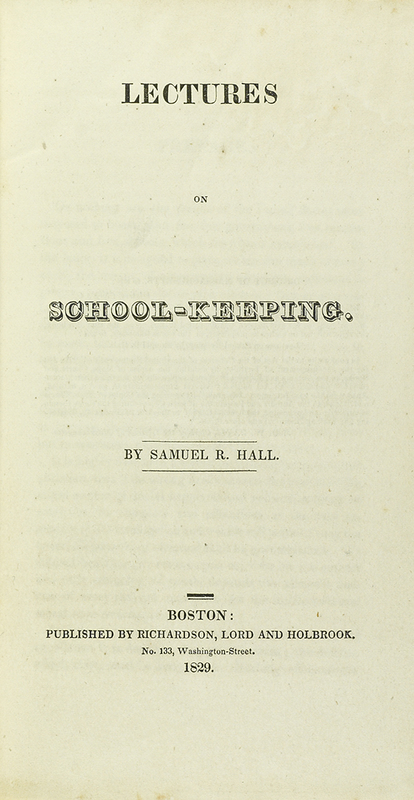 Prior to the 1830s, guidance for teachers as well as students was included in the same textbook.  In providing instruction to educators, authors ensured that their works were used according to their intentions.  It is the present work that bibliographers credit with establishing pedagogy as a discipline.  It includes thirteen lectures on the subject, which address qualifications and training for both male and female teachers. 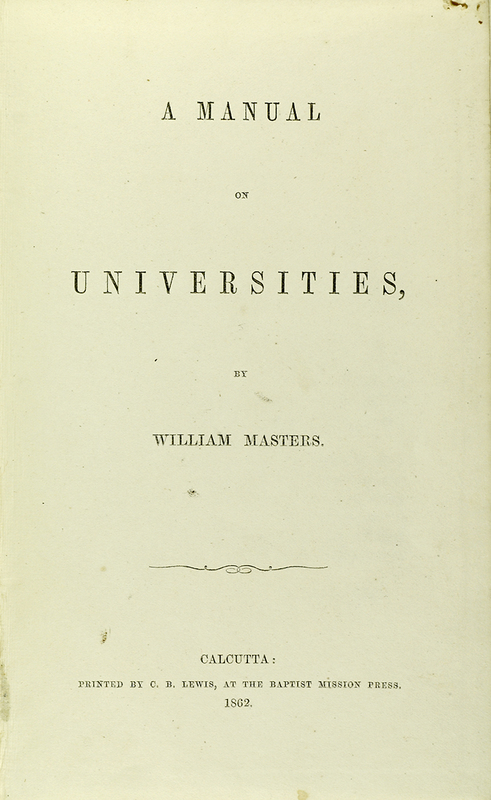 William Masters was a British subject living and working in India.  He was first headmaster at La Martiniere Calcutta from 1836-44, then a teacher in at Hindu College, headmaster of Government College, Kishnagur.  At the time of his death, he was professor of mathematics at Hindu Metropolitan College.  Masters appears to have been familiar with the educational system in Britain as well as in India and advocated instigating a similar system in India.  He wrote a number of books on Indian institutions.

This guide to universities, their courses, structures, libraries, history and purpose, has the aim of showing "that it is the duty and the interest of the wealthy natives of India to establish Schools and Colleges of their own after the model of those of Europe."  This work describes in eight chapters the early history of Oxford and Cambridge and systems of faculties and degrees; the various universities of England, Scotland, Europe, and India; and a final section discusses the use of English, the difficulties concerned with race, and various community schools including Sunday schools.  Masters considered it necessary to translate this work into Bengali and Hindustani to enter upon the mission it was designed to serve. 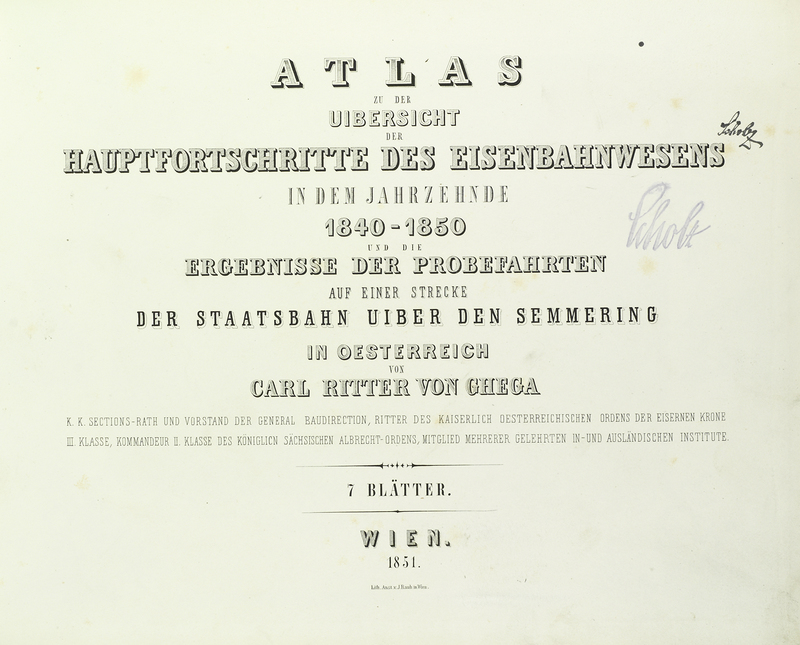 The Austrian engineer Ghega was the designer and chief engineer of the Semmering Railway, which ran from Gloggnitz to Mürzzuschlag crossing the highest point in the Alps accessible by rail at the time.  Ghega visited railways in England, continental Europe, and North America in 1837 and 1842 before he undertook planning the national railway system of Austria.  He devised a plan for crossing the Semmering Pass in 1844 by which locomotives might use an extra rail for gear wheels and designed re-enforced locomotives which could climb steep gradients.  Construction of the 25-mile long “Semmeringbahn” which climbed 1,575 feet was begun in 1848 and completed in 1854.  At its peak, close to 20,000 workers worked on the project.

This atlas contains eight lithographed plates showing views of the railway surrounded by mountains and a colored folding map depicting the gradient and the topography of the area, as well as illustrations of the strengthened locomotives used.