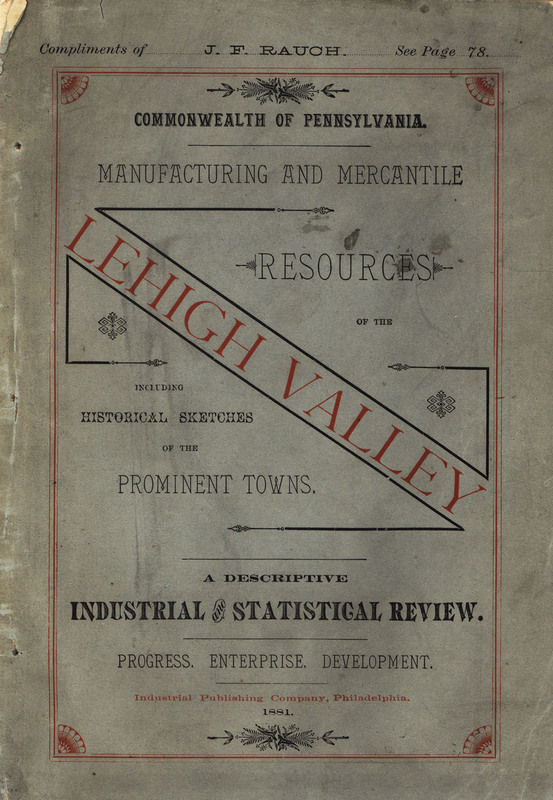 This directory serves as an essential guide to business in the Lehigh Valley during the latter half of the 19th century.  It provides lengthy descriptions of merchants and their businesses in detail for numerous towns in the region, including Mauch Chunk, Slatington, Catasaqua, Easton, Freemansburg, Bath, Hazleton, and Packerton, among others.  Businesses, such as farm and express wagon builders, marble workers, wool and cotton goods manufacturers, cottage chamber furniture makers, slate quarrying, jewelers, tobacco merchants, jobbers of notions and dry goods, stoves and hollow-ware, druggists, sewing machines and organs, surgeon dentists, wallpaper and window shade makers, are described. 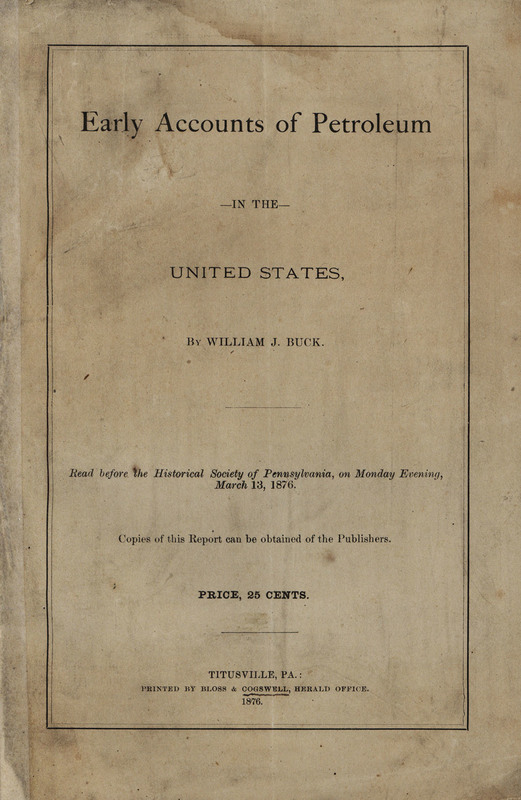 William J. Buck was a member of the Buck Family for whom Bucks County, Pennsylvania, is named, and therefore, a prominent settler of Pennsylvania.  His "Early Accounts of Petroleum" read before the Historical Society of Pennsylvania in 1876 contains an interesting account of the Moravian Church's famous missionary David Zeisberger visiting in 1767 the Indians on the Allegheny River in western Pennsylvania.  He reported  having seen oil springs there which the Indians used as medicinal ointments, but Zeisberger also noted that the brown liquid burns well.  Buck' account reports sightings of oil in western Pennsylvania as early as 1627, and that General Washington was owner of land in western Virginia that had an oil spring on it called Burning Spring.  There are several other interesting observations about petroleum in this account, including as its use as a medicine. 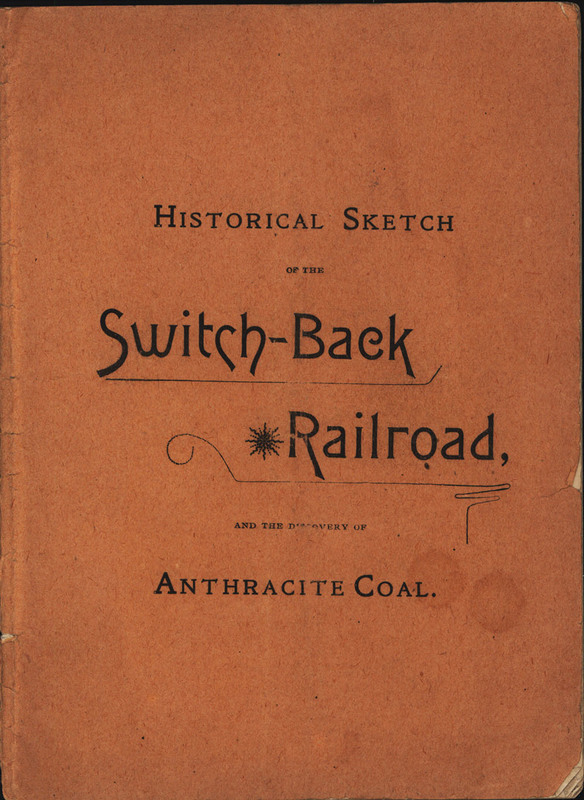 Historical Sketch of the Switch-Back Railroad, and the Discovery of Anthracite Coal.  Mauch Chunk, Pa.: [s.n., 1870].

The Switchback Gravity Railroad was America's second oldest railroad. Built in 1827 to transport coal from the Summit Hill mines to the Lehigh River and Canal in Mauch Chunk (now Jim Thorpe), this engineering marvel served as a popular tourist destination during the 19th century. The 18-mile roundtrip ride was discontinued in 1933, and equipment was sold for scrap in 1937.

This pamphlet includes an advertisement for the railroad, signed by Asa Packer Blakslee, Superintendent.  It operated from “the middle of May to November first” and offered “scenery unsurpassed.” 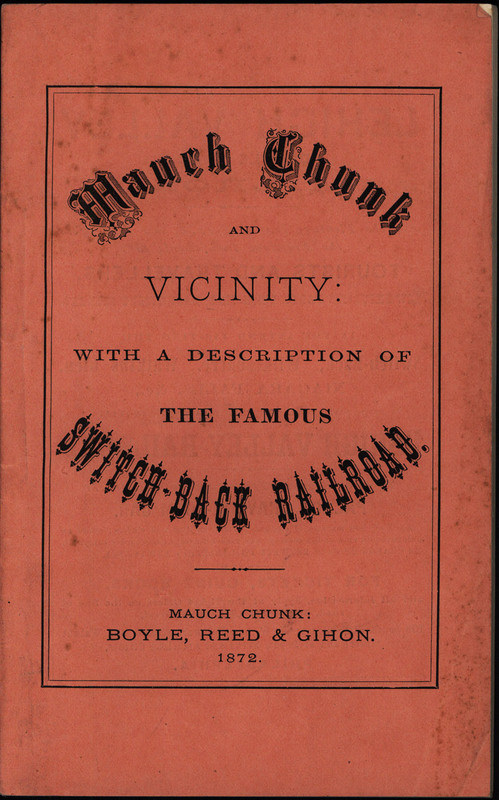 Ephemeral publications, such as view books and tourist guides, provide insight into destinations sought by travelers throughout the past two hundred years.  Many reveal aspects of the natural environment relevant to environmental historians, in many cases illustrating features no longer in existence.  Many of these are illustrated, including maps and in some cases photographs which serve as visual aids.

This little history of Mauch Chunk describes private homes; businesses, including the Lehigh Coal and Navigation Company; and coal mines and mining. 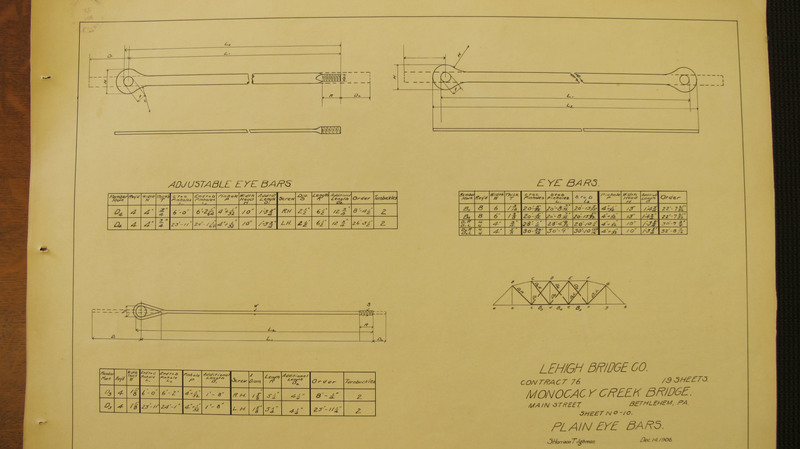 This portfolio is a collection of class assignments in bridge design and topographic drawing courses offered at the turn of the twentieth century in Lehigh University’s civil engineering curricula.  The assignments included making drawings for a truss bridge proposed for crossing the Monocacy Creek, in Bethlehem; plotting a plan for a proposed trolley line in Delaware County; the surveying calculations for a railroad on South Mountain; a survey of Lehigh’s campus at the time; and a plot of land in Saucon Valley, as well as many perspective drawings. 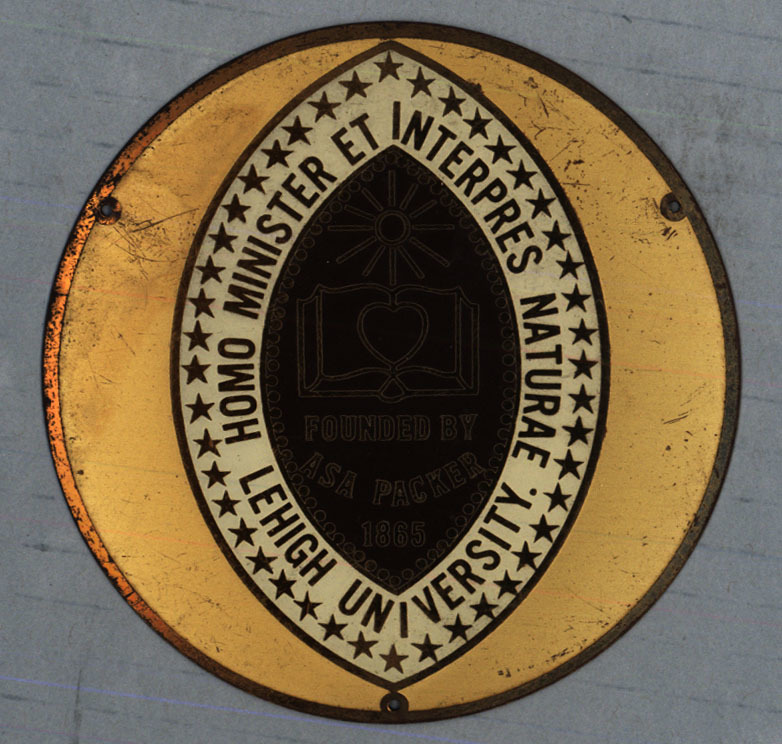 Lehigh University. University Seal Emblem Shield Plaque.
Every item in the Archives tells a story. Some are self-explanatory; telling their story in detail, such as a baseball from a 1899 game, which carries a note: Lehigh 17 – Lafayette 6. But some are mysterious, such as this Lehigh Seal Shield. Possibly removed from an accompanying plaque which might have commemorated a Lehigh event or anniversary... Can you help identify where and how it was used?