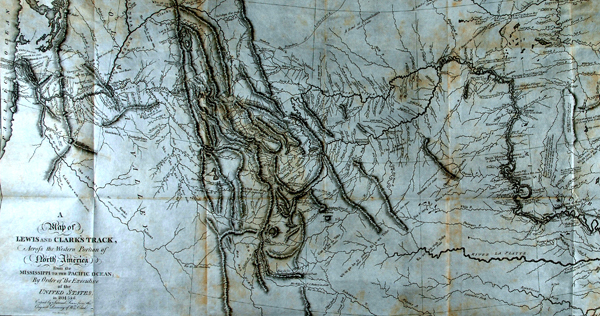 This map has become one of the most famous maps of U.S. exploration. It resulted from Lewis and Clark's exploration of the Louisiana Purchase in 1804-1806, directed by President Thomas Jefferson and funded by Congress. It has also become a national symbol and treasure. A more recent President, William Jefferson Clinton, suggested as much when he declared in a Presidential address that this map "defined the contours and forever expanded the frontiers of our continent and our imagination."

Certainly, the map shown here (reproduced from Lehigh's copy of Lewis and Clark's journals) is the product of a remarkable journey that provided new geographical, scientific, and anthropological knowledge to the U.S. government and those who read the journals. For example, this map shows the Rocky Mountains, the great size and wintry heights of which had challenged the expedition, for the first time as a series of ranges rather than an easily passable single range.

As much as what the map shows, what interests me about this map are the things that it hides. For instance, this map hides geographical assumption as cartographic fact: a fictional Multnomah River appears on this map – even though no such river existed. Its inclusion kept alive the hope of finding a navigable water route across the continent, a route that Lewis and Clark (and many others) had sought but failed to find.

It also hides the fact that Native Americans provided much geographical information to the explorers as they crossed the Louisiana Purchase. Clark, the expedition's primary cartographer, also used information from other explorers such as Zebulon Pike to fill in his map. Clark kept adding information to his manuscript version of the map over the years. It is this hidden production of the map that fascinates me. Rather than as a static symbol, I see it as a collaborative, dynamic product of both exploration and imagination.