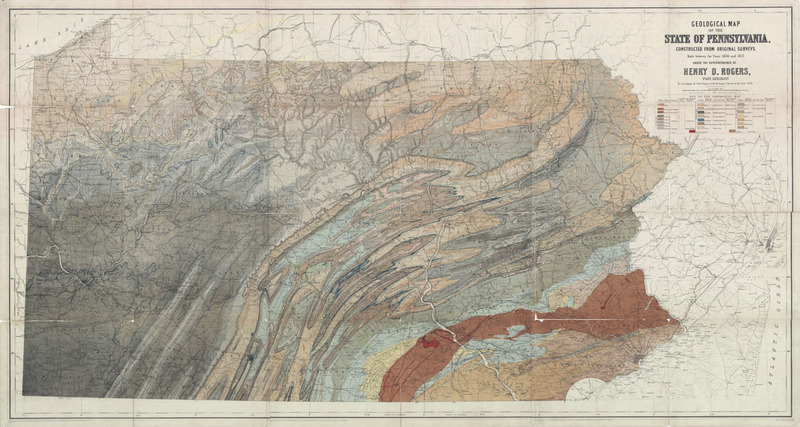 Geological Map of the State of Pennsylvania

A geologic map, to many, is a surreal blur of colorful shapes and sweeping lines that has more in common with a Dali watercolor than a work of science. To the trained eye of a geologist however, a geologic map is the synthesis of a large body of observations dispersed in a three-dimensional landscape faithfully portrayed to scale on a two-dimensional sheet of paper. The colorful patterns in a geologic map show the distribution of rocks at the Earth's surface and in doing so, tell the story of our planet and the processes that shape it. I have always found geologic maps inspiring because of the story they tell, the scientific tenacity that underlies their synthesis, and the skill of the geoscientist in their cartography.

Being a native Pennsylvanian, the Geologic Map of Pennsylvania played a formative role in seeing me pursue the geosciences as a profession. Published just before I entered university, the 1980 map represents the fourth version of a product first published in 1858 by Henry D. Rogers, the first State Geologist of the then fledgling Pennsylvania Survey. Rogers started his mapping of the state in 1836 during a time of rapid population growth, industrialization, and demand for natural resources, most notably coal. The map produced by Rogers is incredibly detailed and accurate in its portrayal of the distribution of rocks in the state; subsequent maps have refined the distribution, but the general pattern illustrated by Rogers remains. Adoption of the formal names of the rock units in the state can be traced back to the second map of the state released in 1893 by State Geologist Peter Leslie. A third, major modernization of rock distributions and nomenclature was compiled in 1960 by Carlyle Gray.

Pennsylvania straddles the central Appalachian Mountains, the tortured and twisted rock units of which are on full display in the colorful map patterns that arch through the central part of the state. The Appalachians are old mountains, having been built over 200 million years ago, and subjected to erosion ever since. The endless gnawing away of the rock layers has resulted in the more durable units standing high beneath forested ridges, and the softer ones lying low beneath fertile valleys. For this reason topography and rocks are intimately related in Pennsylvania, a relationship that is clearly apparent when the geologic map is draped over topography using digital technology. The advent of the computer and computerized cartography, collectively known as a Geographic Information System (GIS), is the just the latest step in the long history of understanding and depicting the geology of the state.