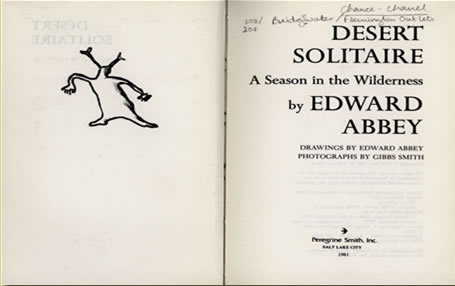 Detailing his experiences as a park ranger at Arches National Monument in Utah, Abbey's Desert Solitaire is "a voice crying in the wilderness, for the wilderness." Dubbed by Larry McMurty as "the Thoreau of the American West," Abbey criticized "industrial tourism" in America's national parks in Desert Solitaire, and vividly described the landscapes of southern Utah.

"Wilderness. The word itself is music.

Wilderness, wilderness...We scarcely know what we mean by the term, though the sound of it draws all whose nerves and emotions have not yet been irreparably stunned, deadened, numbed by the caterwauling of commerce, the sweating scramble for profit and domination.

Why such allure in the very word? What does it really mean? Can wilderness be defined in the words of government officialdom as simply "A minimum of not less than 5000 contiguous acres of roadless area?..."

Desert Solitaire is from the Collection of Robert B. Honeyman, 1920. 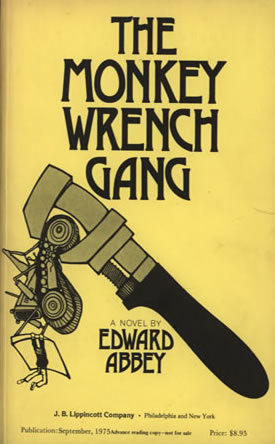 Abbey and the Eco-Warriors

One of Abbey's other works, The Monkey Wrench Gang, is a fictional account of eco-warriors bent on non-violent sabotage, which helped inspire the formation of the radical environmental group Earth First!.