Influential Environmental Works from the 1960s and 1970s 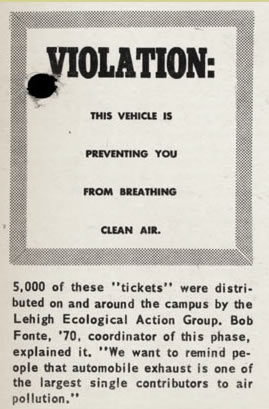 Air pollution was a concern at Lehigh in the 1970s, prompting environmental action on campus. From the Brown and White, February 13th, 1970.

Environmental writing and action since the 1970s has transformed the way people interact with the world around them. Recycling, sustainability, "clean" or alternative fuels, and organic foods are just parts of a larger movement to live more carefully on the earth, and to protect natural resources. The books displayed here are just a sampling of some of the influential environmental works written in the 1960s and beyond.