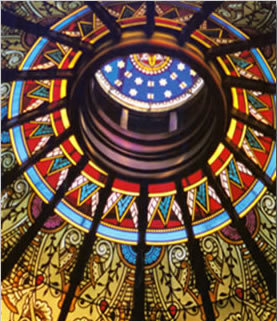 Detail from the skylight

As the Linderman Library opens after extensive renovation, we are inspired to look back at the history of the Lehigh University Library. The Library first opened its doors in 1878; however, the growth of the university called for a major expansion less than a half century later, nearly quadrupling the size of this impressive edifice. The addition, completed in 1929, served the university for another seventy-five years.

Current renovations nearly completed, a state-of-the-art library and humanities center will once again serve the needs of the Lehigh community.

Please join us in looking back, as we celebrate the history of Linderman Library. This exhibit features early photographs and documents, as well as contemporary artists' renderings and promotional material describing the historic past and brilliant future of Linderman. Two exhibit cases in the Reading Room capture the early years, including a major renovation in 1929 and continues on to the recent years. A related exhibition of contemporary photography complements the historical material. The third case up at the 3rd Floor in Bayer Galleria is dedicated to 2005-2007 renovation and contains the construction photographs taken by Lee A. Butz.

The exhibit will be on display this Spring trough April 9th, 2007, and will then return later.