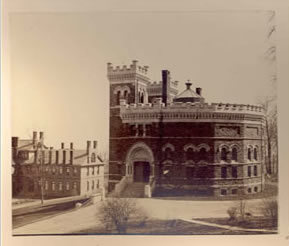 Erected in 1877, Linderman Library opened on April 21, 1878 with a donation of $500,000 from Asa Packer in memory of his daughter Lucy Packer Linderman who died unexpectedly not long after marrying Garret B. Linderman. $100,000 of Packer's donation was used for the construction of the building and $400,000 was set aside to establish endowment for the collections and maintenance of the library.

Linderman Library was designed by the celebrated architect Addison Hutton, who also designed Lehigh University's President's House, Packer Memorial Church, William H. Chandler Chemistry Laboratory). Modeled after the British Museum, the building had a semi-circular plan with Venetian style architecture. It was fireproof, heated by steam, and well lighted. The maker of the stained glass skylight is now unknown. In the late 1990s the dome was removed by DePirey International and shipped by the air to their studio in Bourges, France. It was restored and reinstalled.

The university did not have an independent building for a library for the first twelve years. Packer Hall housed a small collection and "Lehigh Junto", a student literary society, maintained a collection for the students' use. "Lehigh Junto" was dismantled in 1874 and later on its collection became the foundation of the new library.

Besides Asa Packer and the library's first director William H. Chandler, professor of Chemistry, Eckley B. Coxe is the third person who should be cited for his contributions to the progress of the young library. His library of more than ten thousand volumes, bearing the bookplate "Technical Library of E. B. Coxe", were donated to Lehigh by his widow Sophia Coxe in 1896. With this donation, the library's reputation reached world wide. The 1911 edition of The Encyclopedia Britannica cites Lehigh University Library as one of the modern American university libraries with a collection more than 150,000 volumes.