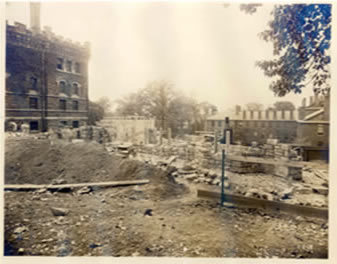 Another part of the exhibition contains photographs dating from the 1929 addition to postcards from recent years.

Linderman's first major renovation was completed in 1929 thanks to generous donations of twenty trustees. The building's floor area was enlarged five times than the original to accommodate ten times the number of readers. It was designed to hold half a million volumes and also accommodated the Art Gallery (currently "Bayer Galleria").

The builder was "Jacob and Young" of New York, the builders of the Cathedral of St. John the Divine. The architects were Wisscher and Burley of Philadelphia (both Lehigh graduates who also designed Alumni Memorial Building and Packard Laboratory). The building's architectural style is English Collegiate Gothic with quartize stone trimmed with Indiana limestone. The beautiful woodwork was put in by Wilt and Company of Philadelphia. The lights were designed by Mr. Wright, a Cornell engineer and lighting specialist (the current lights in the lobby area are the remaining examples).

The colorful medallions on the Reading Room windows represent the various branches of knowledge and specific subjects taught at Lehigh. The initials L and P in the Reading Room stand for "Linderman" and "Packer", attributed to the original building as a memorial.

Four floors of steel stacks were built by Snead and Co. could hold 300,000 volumes. The walls of the lobby are travertine from Italy. The floors of the hall ways and most of the rooms are terrazzo.

Most of these features of the building are still visible in the newly restored Linderman.