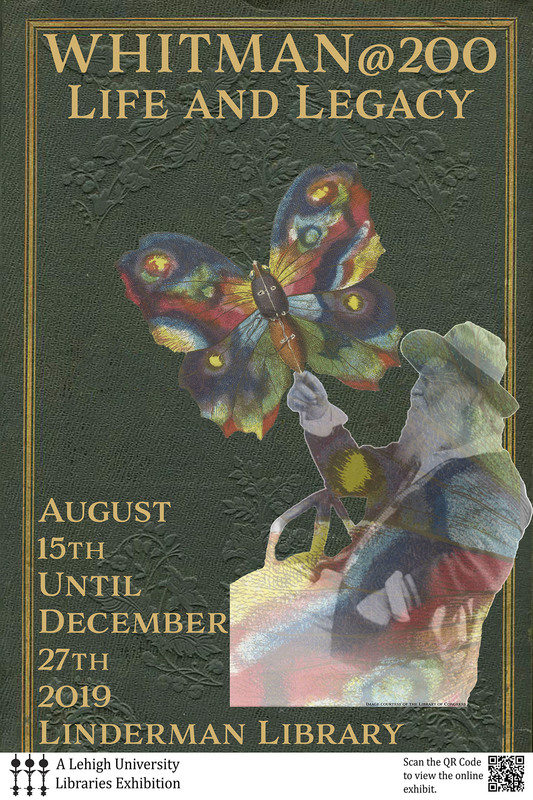 The great American poet Walt Whitman celebrates his 200th birthday in 2019. Whitman is known across the world as an innovator in free verse poetry, as a powerful voice in support of democracy, and as a representative of outsiders from a variety of backgrounds. As a queer, working-class poet, Whitman has inspired readers and writers alike not only to celebrate their unique experiences, but also to listen more closely to the experiences of others. Lehigh University will join with libraries from the major East Coast cities where Whitman lived--at institutions such as the Grolier Club in New York City, the University of Pennsylvania in Philadelphia, and the Library of Congress in Washington, D.C.--to celebrate Whitman's accomplishments and his ongoing legacy through an exhibit of rare books and other related materials.

Lehigh is in a unique position to join this celebration thanks to its unusually rich Whitman holdings in the Robert B. Honeyman Collection. Honeyman was a Lehigh alumnus who donated his extensive collection of American and British literature to the university, including three copies of the first edition of Whitman's Leaves of Grass (1855), as well as major subsequent editions of the book as Whitman revised and edited it throughout his life. The Lehigh exhibit will also include a display about writers who have been inspired by Whitman's life and works, including queer novelists like Willa Cather and E. M. Forster, and African American poets such as Langston Hughes and current U.S. Poet Laureate Tracy K. Smith. Finally, the Lehigh exhibit will include displays about the bohemian writers and artists who were Whitman's comrades in arms in New York City in the years leading up to the Civil War.

Lehigh personnel (Edward Whitley in the English Department and Rob Weidman in LTS) have been instrumental in raising awareness about Whitman's bohemian period through their digital humanities project The Vault at Pfaff's: An Archive of Art and Literature about the Bohemians of Antebellum New York (lehigh.edu/pfaffs), which is also celebrating its 15th anniversary in 2019. During the fall semester of 2019, a number of campus events will be organized to coincide with this series of exhibits, including a talk by Professor Whitley, a presentation by a visiting scholar, and a reading of poetry by students and faculty.

Leaves of Grass →
About