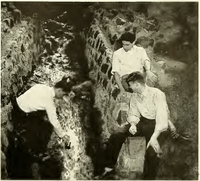 Students circa WWII at the spring 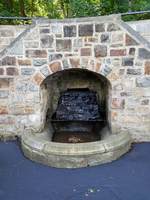 Spring between Drinker and Dravo

"A few hundred yards west of Packer Hall was a rocky locality known as "The Old Man's Place." A hermit made it his abode up to about 1885. Quite a stream of water ran through it and it was a favorite resort, when I was a student, for Bethlehem's picnic parties."

The Crystal Spring is a historic feature of the Lehigh landscape that has literally gone underground. Its importance in the early years of the university was as a water source--the university purchased land south of the campus in order to control the stream(s) that supplied water to the campus. Later Sayre Park was established after a $100,000 donation from the children of Robert Sayre, who was chief engineer of the Lehigh Valley Railroad and helped found Lehigh.

The source of the spring is near the Lost Forest, and looking at a topographical map you can trace its flow from there, to where it historically flowed through campus and into the Lehigh River.  Named by the Board of Trustees (Alumni Bulletin , 1939-40), the spring was well-known part of the campus --students drank from it, recreated near it, and it was  viewed as a water source in the early years.

Dr. Williams, in speeches about the construction of Drinker House:

"The Crystal Spring Ravine has the native possibilities of being a feature of great beauty and attractiveness which will add to the enjoyment of studying and living at the University." (1937-38)

No student to go thirsty should war come to Lehigh, Brown and White, April 21, 1942.