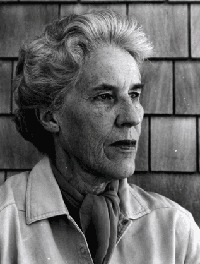 Catherine Drinker Bowen was the daughter of Dr. Henry Sturgis Drinker, "71, and wife of Professor Ezra Bowen, "13. She grew up on South Mountain at the time her father was President.

In her book A history of Lehigh University, she writes:

"In 1881 the University Grounds were described as “a wilderness.” Indeed, all of the University acres back of Packer Hall remained a wilderness until 1906. The writer of this book was eight years old when Dr. Drinker removed his household from Delaware County to Number Three, University Park, and if our readers will pardon a digression into the personal, she well remembers her disgust when, a year after his arrival, they began to build the road back of the president's house. It cut straight across a brook well stocked with salamanders and crawfish, and spoiled the best part of her fishing.

By that road the southern boundaries of the campus were broken, and year by year the University pushed up the hill, laying roads and erecting buildings, clearing and pruning and planting, until a mountain park was developed which, excepting Cornell and Leland Stanford, is rivalled by no university in America."