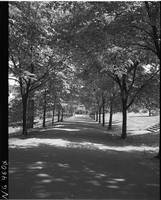 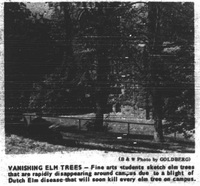 A number of years ago Lehigh conducted a census of trees to affirm the great diversity of species -- well over 100 species were identified. One of the surprising finds was an American elm thriving near the Alpha Tau Omega fraternity near Lookout Point.

Where did the elms go? Dutch elm disease (DED)
An American elm of this size and health is unfortunately fairly rare. In the last century, over 75% of the nation's American elms were lost to Dutch elm disease (DED), and nearly all the elms on campus and across the nation perished in the outbreak. The Memorial Walkway was originally planted with elms in 1930, but the diseased trees were removed in the sixties and replaced with black locusts.

Why did this elm survive? Possibly its continued health could be related to its location and relative isolation. The elm's beauty and vaselike shape made them a popular choice to line streets and drives. Elms near one another can even share their root structure, allowing disease to spread easily. Lehigh's elm is isolated from other trees, largely enclosed within a parking lot.

There is one other elm, on the main campus. In 2012, a Princeton elm (Ulmus americana 'Princeton') was planted outside Coppee Hall. This cultivar has excellent resistance to DED.