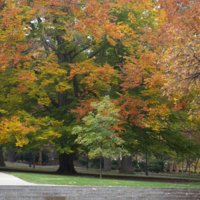 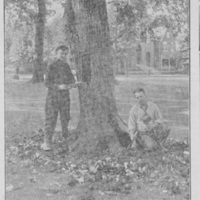 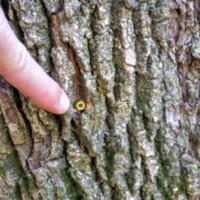 Among the thousands of trees across Lehigh's campuses are trees notable for their beauty, age, uniqueness, and historical significance. Every species native to Pennsylvania and diverse species from other regions of the U.S. an the world are found here -- well over 100 species. The abundance and variety of trees exceed the criteria required to be a certified arboretum.

Early stewardship: The Chestnut blight of the 20th century
Many trees on campus today were planted in the early 20th century, to replace trees that perished in a devastating chestnut blight. Before the blight, one in four trees in the eastern forests were chestnut trees (Castanea dentata). First detected in New York in 1904, the chestnut blight spread rapidly and ultimately eradicated chestnuts from the forests where they had once thrived.

1900-1925: Lehigh replants its forest
Chestnuts made up a significant proportion of the trees on South Mountain, and all were lost. President Henry Sturgis Drinker, and later others, undertook the project of replenishing forests made sparse from the blight and from logging. Over 100,000 trees were planted between 1900-1925. The spectacular mature trees on our campus today can be traced to early efforts to restore the mountainside canopy.

2017: Protecting vulnerable ash trees
Today, another blight threaten a major tree species -- the Emerald Ash borer (EAB) is killing tens of millions of ash trees (Fraxinus species) across thirty states. As this parasite makes its way into Pennsylvania, Lehigh's arborist identified 200 ash trees on or near campus; these have been treated for EAB via trunk-injected systemic insecticides.