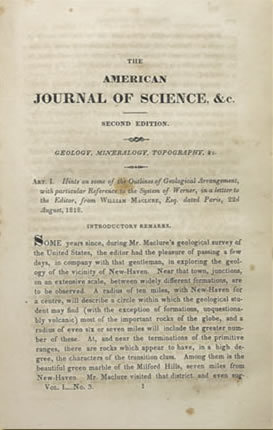 Begun in 1818 as the brain child of Benjamin Silliman, "Professor of Chemistry, Mineralogy, etc. of Yale College," the journal featured original research, "letters" (brief notes), and articles published elsewhere. The latter was a common practice of the period. Silliman was careful to define his purpose and method in the inaugural issue, stating that "the Editor does not pledge himself that all subjects mentioned shall be touched upon in every number" and that the journal was "designed as a deposit for original American communications," although he would print selections from "foreign" journals and report on the progress of science elsewhere in the world. Billed as a publication to "embrace the circle of the Physical Sciences, with their application to the Arts, and to every useful purpose," it eventually became a major journal in geological science. Early volumes contain beautiful illustrations, some hand-colored.