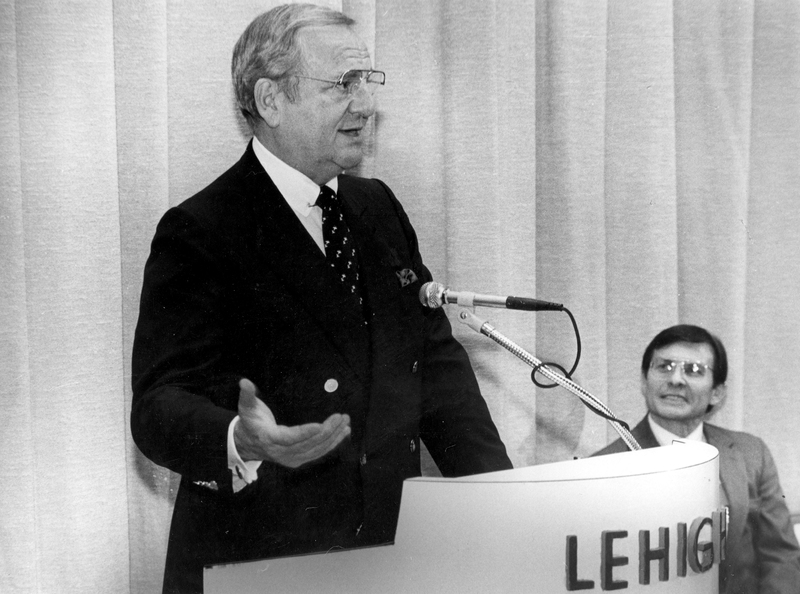 This exhibition, “At the Podium: The Speeches of Lee Iacocca, 1978-2011,” celebrates Lehigh alumnus Lee Iacocca’s gift of over 500 annotated public speeches and presentations delivered over the course of thirty years.

The Iacocca collection contains over 500 individual presentations delivered by Mr. Iacocca between 1978 and 2011.  Approximately twenty original speeches are featured from venues ranging from commencement exercises to press conferences to Lehigh University, as well as those delivered to members of the automobile industry.  Also featured is a selection of speeches associated with Iacocca’s service on The Statue of Liberty-Ellis Island Centennial Commission. The speeches in this exhibit case relate to Iacocca’s tenure at the Chrysler Corporation.

Each displayed document shows the author’s manuscript annotations.  The majority of speeches exhibited are accompanied by articles from contemporary published reports on each of the events as they took place, showing how Iacocca shaped current events, and how the world reacted. 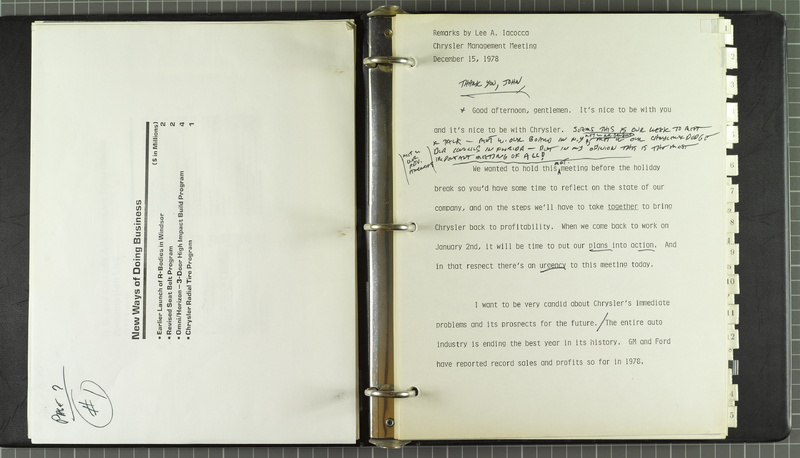 When Lee Iacocca delivered this presentation to Chrysler’s senior management, he’d been at the company just over a month. This speech, which includes photocopies of transparencies accompanying the presentation, was intended to introduce Iacocca’s plans for change at Chrysler.  Iacocca took this opportunity to present statistics on sales and production, while stressing accountability and discipline.

Iacocca also provided words of encouragement, reaffirming his faith in the company that he anticipated returning to profitability. 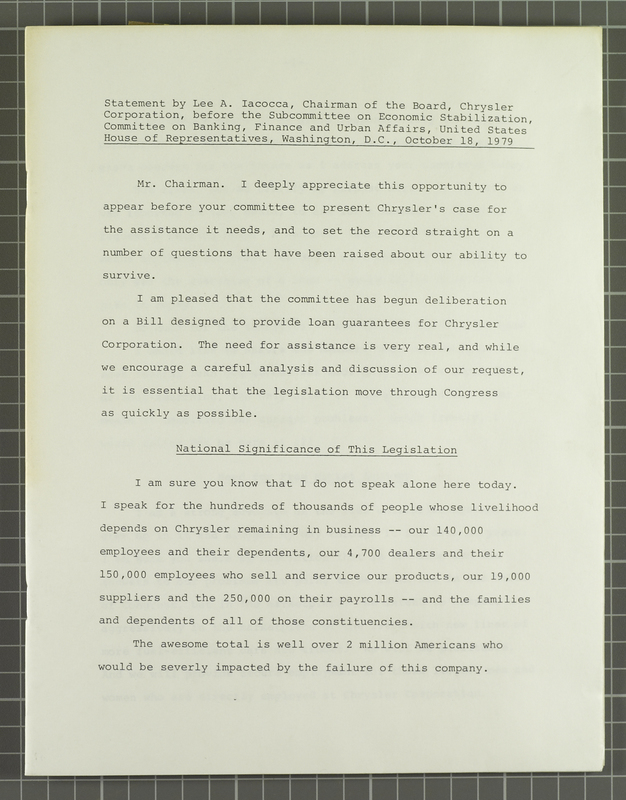 Lee A. Iacocca.  Statement by Lee A. Iacocca, Chairman of the Board, Chrysler Corporation, before the Subcommittee on Economic Stabilization, Committee on Banking, Finance and Urban Affairs, United States House of Representatives, Washington, D.C.  October 18, 1979.

Iacocca researched Chrysler’s options, ranging from corporate partnerships to declaring bankruptcy to outright failure. As the nation’s tenth largest employer in 1979, the loss of Chrysler would be catastrophic in terms of wages both in the company and to external vendors.

Iacocca testified before this House Subcommittee, outlining the number of employees, dealers, mechanics, suppliers who would be negatively impacted by the loss of the Chrysler Corporation.  He also explained the circumstances which had put the company in this precarious position, and outlined the steps the company had already taken to improve its situation.

The bill that eventually went before the House and Senate passed, authorizing a Federal Loan Guarantee of approximately $1.5 billion.  The government in effect “co-signed” for the loan of funds from numerous private sources. 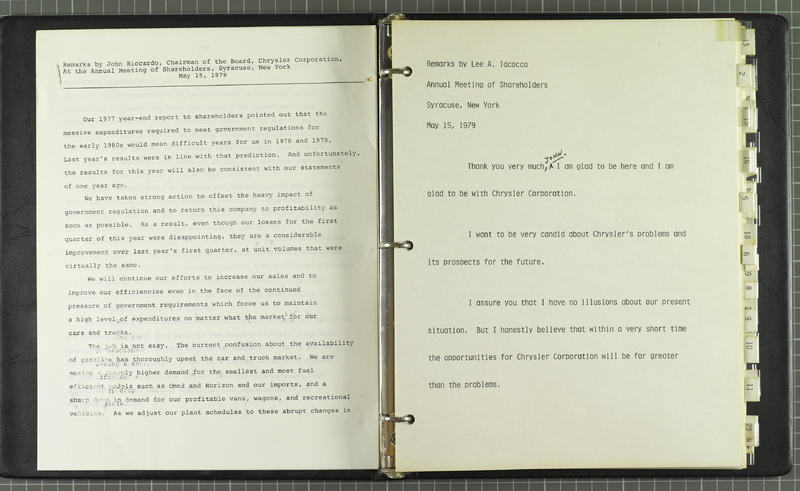 At his first Shareholders meeting, Iacocca had the grim task of reporting on Chrysler’s financial state.  However, he quickly turned attendees’ attention to his vision of a “5-point program” that would turn the company around.  His plans included inventory reduction; improved sales; improved quality; a new, competitive line-up of cars and trucks; and new ways of doing business.

One marked change Iacocca implemented immediately was to require dealerships to place firm orders for new vehicles, rather than to allow them to select from a stock of pre-built inventory.  This would result in a streamlined production schedule.  In this presentation, Iacocca described this change as “the most important single program in the rebuilding of the Chrysler Corporation.”

Also included with this presentation is a copy of remarks by John Riccardo, Chairman of the Board, Chrysler Corporation, who preceded Iacocca at the podium that day. 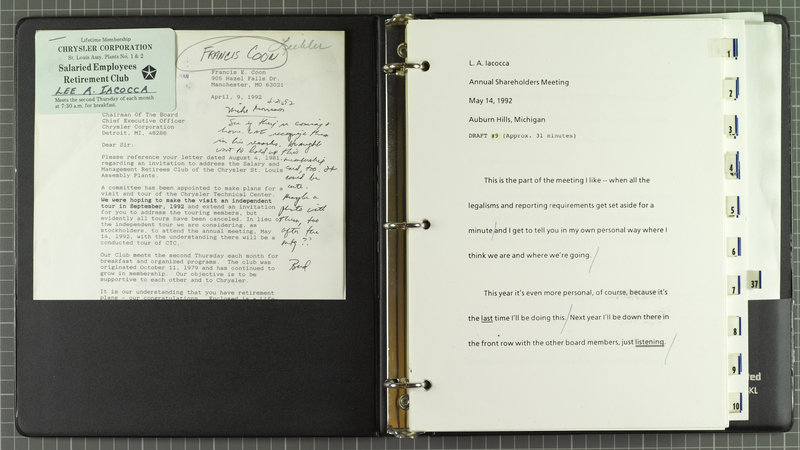 At his last shareholders meeting, Iacocca addressed the challenges faced by Chrysler – rising health care costs, trade policies, and government regulation topics recurrent in the automobile industry for decades.  Iacocca reported on the year’s accomplishments, including safety advancements such as airbags and child safety seats and new models such as the Jeep Grand Cherokee and electric minivan. 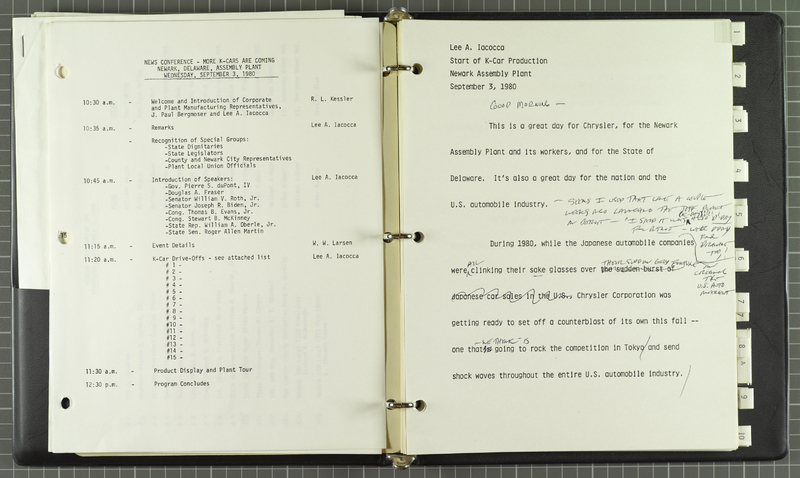 The K-Car, a small, front-wheel drive car marketed under the Chrysler names Dodge Aries and Plymouth Reliant, began production at the Jefferson Assembly Plant in Detroit shortly before this Delaware plant was opened.  It was one of the most anticipated new models in years, and it was expected to drive Chrysler’s recovery.

Included with this speech is a transcript of Newark plant manager R. L. Kessler’s presentation, and an agenda for the day’s news conference, which included noted speakers such as Joseph Biden. 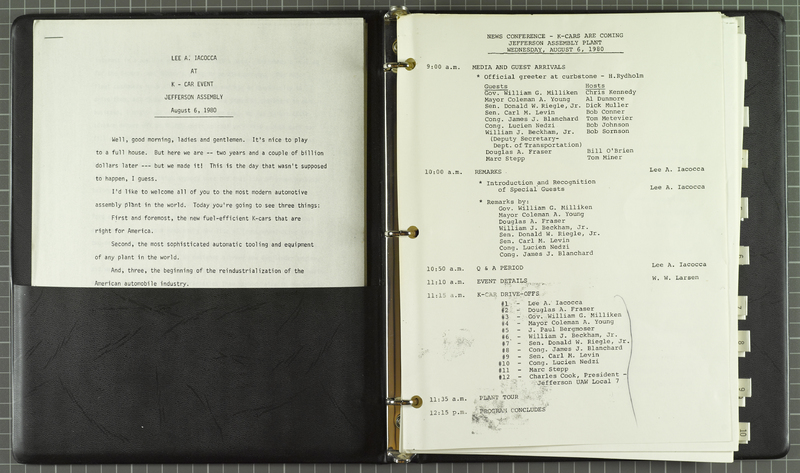 Lee Iacocca presided over the three-hour news conference inaugurating K-Car production at the Jefferson Assembly Plant in the city of Detroit.  Attendees included Michigan senators and congressmen, in addition to the Governor and Mayor of Detroit. 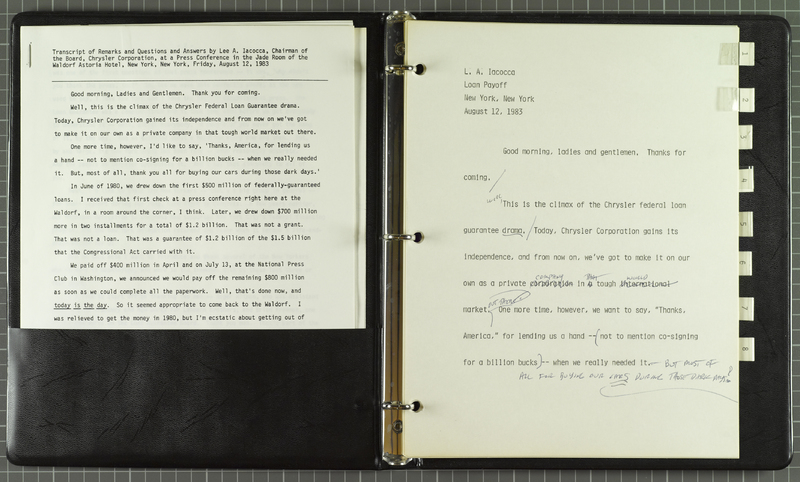 This was perhaps the greatest milestone of Iacocca’s career. In 1979, Lee Iacocca had lobbied the Federal Government to guarantee loans of over one billion dollars to keep the Chrysler Corporation afloat.  In this speech, Iacocca explains how company borrowed $1.2 billion for ten years, but managed to pay back the loans in three years.