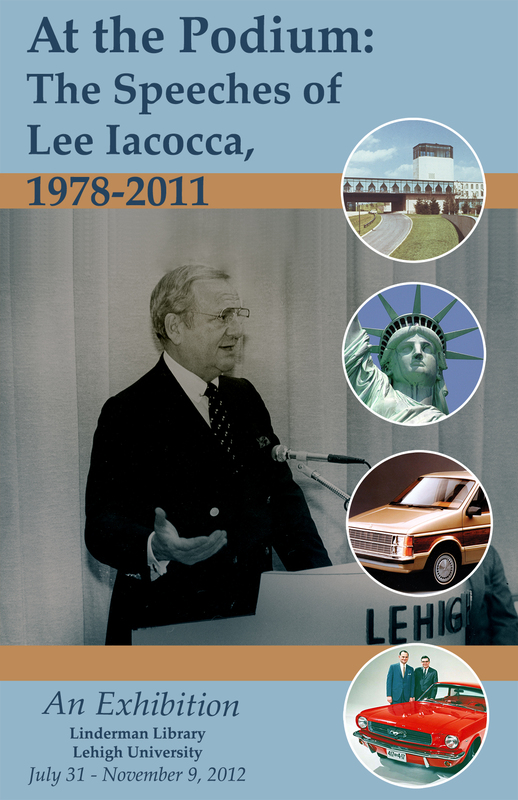 The Lehigh University Libraries Special Collections is pleased to present an exhibition to celebrate Lee Iacocca’s gift to the collection of over 500 annotated speeches presented over the course of thirty years. The exhibit, “At the Podium: The Speeches of Lee Iacocca, 1978-2011,” is intended to inform and educate visitors about Lee Iacocca’s contributions to American business history and to promote this newly acquired archive to the Lehigh community, scholars, and life-long learners at Lehigh and beyond.

The Iacocca collection contains over 500 individual presentations delivered by Mr. Iacocca between 1978 and 2011. Approximately twenty original speeches are on display, including selections presented at commencement exercises, press conferences, and many delivered to members of the automobile industry. Also featured is a selection of speeches associated with Iacocca s service on The Statue of Liberty-Ellis Island Centennial Commission and to his alma mater, Lehigh University. Each displayed document shows the author s manuscript annotations.

Lee Iacocca, a native of Allentown, Pennsylvania, graduated from Lehigh University in 1945 with a degree in industrial engineering. Upon graduation, Iacocca was offered a position at the Ford Motor Company, where he rose through the ranks before ultimately being appointed President of the automotive giant. During his tenure at Ford, Iacocca was credited with developing the Mustang. After several turbulent years, Iacocca left Ford in 1978. That same year, the beleaguered Chrysler Corporation recruited him to serve as its president and soon after as Chairman of the Board. He is best known for securing a government guarantee for loans amounting to $1.5 billion and returning the company to profitability. Iacocca retired from Chrysler in 1992.

The majority of speeches exhibited are accompanied by articles from contemporary published reports on each of the events as they took place. Articles illustrate how Iacocca shaped current events, and how the world reacted. Also on display is Lehigh memorabilia, including articles from the student newspaper the Brown and White and the Epitome yearbook, illustrating events during Iacocca’s time as a student at Lehigh and his many contributions to the university in the following decades.

The exhibition was located in the Linderman Library Cafe Gallery, the first floor reading room, and the third floor Bayer Galleria between July 31 and December 21, 2012.

Iacocca Biography →
About the Exhibit