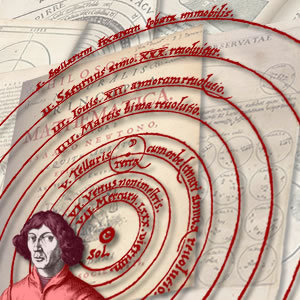 Prior to Copernicus, the belief that the Earth was the center of the Universe held sway. This perspective was based on ideas of the second century geographer, astrologist and astronomer, Ptolemy of Alexandria.

The scientific revolution launched by Copernicus continued with the explorations of later figures such as Brahe, Galileo, Kepler, and Newton, whose works can be followed step by step in the remarkable books exhibited here.

This exhibition features works in Lehigh University's Special Collections by Ptolemy and by Copernicus and other early modern scientists. Also included is a 1907 publication recording astronomical data taken at Lehigh University.

Lehigh Libraries recently digitized two of these works for an undergraduate seminar, "The Problem of Planets", taught this spring by Alex Levine and Gary DeLeo. This and other Lehigh digital projects can be accessed from the Digital Library.

Besides these works, Special Collections houses around twenty five other rare early astronomical works. Lehigh University makes all these materials available for research and consultation without restriction.

The exhibition will be on display through the third week of March 2004 in Linderman Library's Special Collections. Hours: 1-5 p.m. M-F, otherwise by appointment.

The physical exhibition is curated by Brian Simboli and Ilhan Citak.

Nicolaus Copernicus →
About the Exhibit