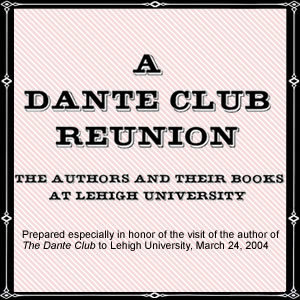 Matthew Pearl's novel The Dante Club (New York: Random House, 2003) is a murder mystery set in Boston immediately after the Civil War. Its protagonists include Henry Wadsworth Longfellow, who is translating Dante's Divine Comedy; in this endeavor he is being assisted by Oliver Wendell Holmes Sr., James Russell Lowell, and the publisher James T. Fields, all making up "The Dante Club."

The reality of this effort is attested to by the actual translation, published by Fields in 1867.

The stuff of Pearl's novel consists in a set of three murders, each one calculated to resemble a punishment described by Dante in his great work. The members of the Dante Club, Longfellow, Holmes, Lowell and Fields, soon realize that they must solve the murders themselves, which they do at great risk to life and limb.

This exhibition brings to life the real literary figures who are members of the Dante Club by displaying some of their publications held by Lehigh's libraries. In addition, since Fields, although the author of one or two of books, was better known as the leading literary publisher of his day, he is largely represented by titles his firm published around the time that Longfellow's Dante made its appearance.

In addition, the display includes a letter written by Lowell to Longfellow, very close to the time that the Dante translation was finished.