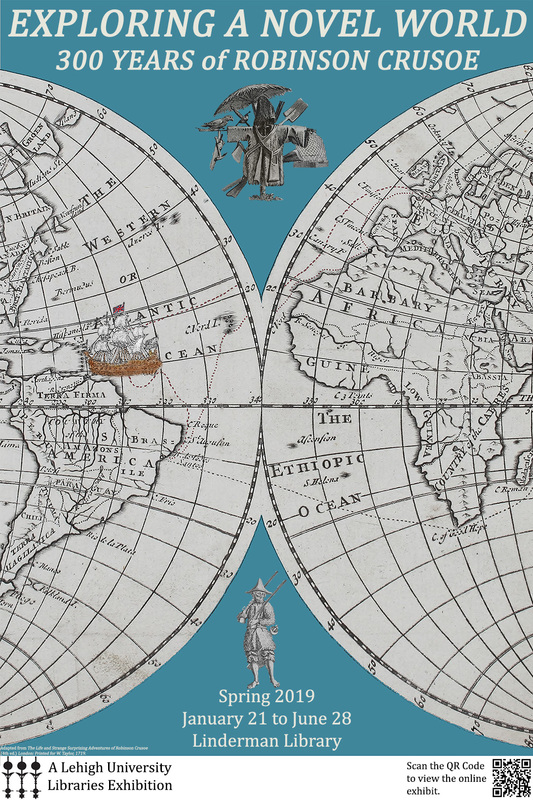 2019 marks the 300th anniversary of the publication of Daniel Defoe’s groundbreaking novel, Robinson Crusoe. In commemoration of this anniversary, which may come as a surprise to many whose first introduction to this story was through juvenile literature, Special Collections opened the exhibit “Exploring a Novel World: 300 Years of Robinson Crusoe” on January 21. Young readers around the world have been introduced to this tale of a shipwrecked castaway through abridged and illustrated editions for centuries. However, the story has roots in the true life story of a sailor shipwrecked during the first decade of the eighteenth century.

Considered to be one of the first English-language novels, this fictional tale of a young middle class Englishman who left home in 1651 to pursue adventures at sea provides a look at information available to Defoe at the time of its writing. Included are vividly painted pictures of eighteenth century maritime technology, flora and fauna, the slave trade and encounters with pirates. The central themes and conflicts of Defoe’s timeless novel (mutiny, castaways, and survival) have been revisited by countless authors in a multitude of formats.

Displayed in addition to early editions and translations of Robinson Crusoe are examples of Daniel Defoe’s other writings, scientific works of the period, and other interpretations of Robinson Crusoe drawn from both Lehigh’s Special Collections and the Lehigh Libraries. It is our hope that examination of this primary source material will inspire exploration of this literature, whether through the study of flora and fauna, navigation history, the novels themselves, or another theme.

The exhibit will be on view in the Linderman Library grand reading room, Café Gallery, and Bayer Galleria, through June 28, 2019.