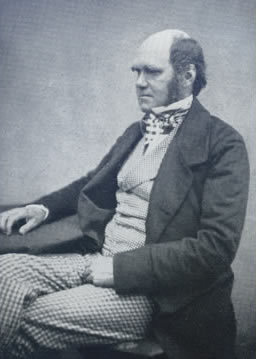 Building upon the success of last year's award-winning "199th Birthday Celebration" for Charles Darwin sponsored by Sigma Xi, Special Collections presents an exhibition featuring works from Lehigh's Darwin collection. Included is an annotated proof copy of Darwin's ground-breaking work in the theory of evolution, including On the Origin of Species.

Thanks to the generosity of Robert B. Honeyman, '20, Lehigh holds one of the world's premier collections of Charles Darwin's works. Honeyman, who earned a degree in Metallurgical Engineering, became a passionate book collector shortly after graduating from Lehigh. His initial collecting focus was on first editions of American and English literature, which he donated to the Lehigh Libraries. Honeyman's interests soon shifted to the history of science. He sought and acquired significant works in scientific disciplines, concentrating for a time on the works of Charles Darwin. Honeyman did not simply acquire early editions; he collected important copies, including annotated proof copies corrected in the author's own hand.

Two exhibition cases are located in the main reading room in Linderman. One contains material relating to the second voyage of the HMS Beagle (1831-1836). The voyage was anticipated to last two years when Charles Darwin accepted the position of ship's naturalist and companion to the captain, FitzRoy. The journey, however, extended well beyond this estimate, taking five years. The Beagle left Falmouth, sailed to Brazil, and circumnavigated South America, returning to England via New Zealand and Australia. It was on this voyage that Darwin became an accomplished geologist, fueled by his observations in South America and the specimens he collected there.

Featured is the three-volume set of the Zoology of the Voyage of the Beagle, perhaps the most important colored zoological text of the 19th century. In it, Darwin described mammals, birds, reptiles, and fish, among other specimens. Also present are Darwin's works on coral reefs and volcanoes, in addition to accounts of his geological findings and narratives of the voyage.

The exhibit concludes in the café gallery on the ground floor. Darwin's contributions to scholarship are most closely associated with the theory of evolution, but his impact may be felt across a wide range of disciplines. Although his training was that of a biologist, his first published work was on geology. His wide-ranging influence is reflected in this selection of works on theology and economics, as well as in the geological and biological sciences. The exhibition will be on view in Lehigh's Linderman Library from February 12-June 30, 2009.